While many apartments in Manhattan have high ceilings, there are a small number that push up even further, with one or two double-height rooms and, frequently, a mezzanine that overlooks their open volume.  These large apartments were built as “studios” for New York artists and those associated with them.

As architecture, they reference Paris, whose artists and art market dominated the latter decades of the 19th century.  “Studio” apartments were first developed in Greenwich Village after the Civil War, when New York, still looking to Europe, was beginning to come together as an art center.  But the more highly evolved examples were built uptown, after 1900.  Replacing Paris as the primary art center after World War II, New York inspired its own much more common housing type, the artist’s “loft”, located Downtown.

Thus two apartment types, the double height studio and the loft, were inspired respectively by 19th and 20th century art markets.  Both were occupied by artists or, later in their evolution, by those who enjoyed an association with the arts.  (My brother-in-law,  who built his own double height studio, explains that the higher ceilings allow larger work and make for better and more diffused light.)

Following is an image of Eugene Delacroix’s studio in Paris, on the rue Notre Dame de la Lorette as shown in the weekly newspaper l’Illustration in 1852.  Delacroix, famous in the in the mid 19th century, was said to have been an illegitimate son of the Duc de Talleyrand, and his technique was an inspiration to artists of the Romantic movement and later to the Impressionists.  (See the current exhibition at the Met.)

His studio had a high ceiling, a large north-facing double-height window with a skylight, a tall fireplace mantel and pictures covering the walls.  The stove was typical of the period, due to heat loss, and it featured a lengthy stove pipe, to maximize its effectiveness. [1]

It was both a work space—note the easels, the tables, and the stairs built to handle large commissions—and a show space for selling work.  This, as we will see, became a familiar image in New York. [2]

The studio of the successful French artist was sometimes built for that purpose, as was Delacroix’s later studio, now a museum on the Place Furstenburg, again with north light and a roof light above it, facing a quiet yard.  Of course, few artists in Paris lived and worked in this manner.  Most were in much more modest spaces, often on the upper floors of walk-up buildings, but even many of these offered north-facing roof light.[3]  But there were also multi-unit studio buildings for artists, and their development continued into the early 20th century. 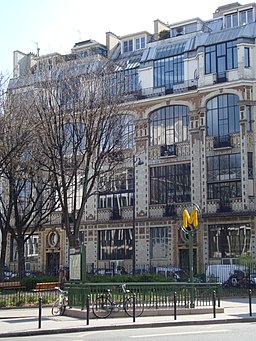 This building is at the juncture of art-nouveau, art-deco and the international style.  Its architect was active from 1900 until the early 1930’s.   Following is a quotation from Wikipedia France :

“. . . the large bay windows and the duplex apartments announce the spacious volumes of the Modern movement and the style of artist studios that was fashionable during the 1920’s and 30’s, coveted by a clientele seeking innovation.  The 20 studios in this building were built with considerable comforts, thus targeting artists with means.”

This building, on 10th Street in Greenwich Village, was based on examples that Hunt saw in Paris.  Built around a sky-lit, two story, exhibition room, were three floors of high-ceiling studios, many with bedrooms at the half-levels.  It was the first building in America built specifically for artists.  In its early years, it housed John La Farge, Frederic Church, Albert Bierstadt, and Winslow Homer, among others.[4]

The building was sadly demolished.  But there are other more modest art studios in Greenwich village, and as in Paris their large windows are still visible on the upper floors of old houses. 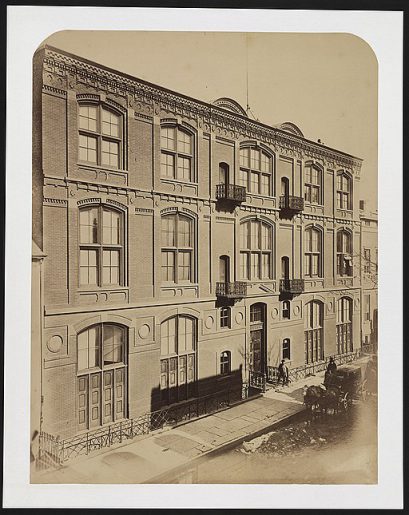 Tenth Street Studios, 51 West 10th Street, from the collection of the American Institute of Architects and the American Architectural Foundation, Wikimedia Commons

The buildings in which I am most interested, however, are the later cooperative apartment buildings, which synthesized references to Paris art studios, while fitting into the larger development of New York apartment buildings before and after the First World War.  The earliest of these buildings were extremely innovative, avoiding the long hallway plans that characterized conventional apartments of their time.

They met the needs of artists, while offering compact, grand, work and living spaces.  They did so by focusing circulation on the mezzanine and the double height space, a compact alternative to the foyer-based plans that were later developed by Rosario Candela.  They offered multi-bedroom living spaces with indoor plumbing and central heating; they stacked taller than their equivalents in Paris, with large comfortable elevators transporting both people and art.

These were both owner-built housing and business ventures that mixed larger units with smaller ones for rental revenue, or catered to those who were not artists at all, or offered simplex living rooms, for owners with more conventional needs or tastes. They incorporated services, such as the restaurant, kitchen, theater, pool and squash courts at the apply named Hotel des Artistes, or, later, access to a hotel and hotel services for the Carlyle House.  Ultimately, they inspired more banal creations during the 1980’s, double height living rooms overlooked by single mezzanine bedrooms.  But together they offered a story in architecture that remains inspiring, and relatively rare. 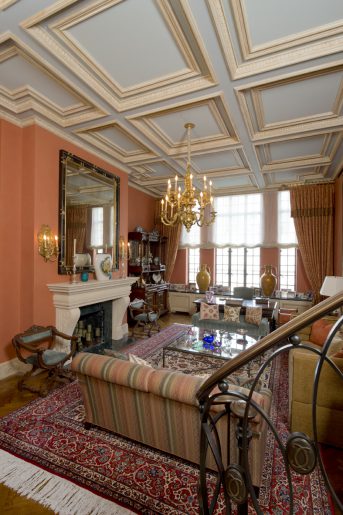 [1] The Studios of Paris, The Capital of Art in the Late Nineteenth Century, John Milner, Yale University Press, 1988

2 Responses to The Double Height Studio