Members of the City Club (cityclubny.org) met with New York City Council Land Use Staff and a representative from City Councilman Daniel Garodnick’s office to discuss changes to the zoning changes proposed for East Midtown.   The purpose of the zoning changes is to encourage development of large new, modern office buildings, near Grand Central Station and elsewhere in East Midtown.  These are due for a vote within the next few weeks.

The City Club believes that the logic and implementation of the proposed zoning changes are flawed.  Nevertheless, some version of these amendments is likely to be approved by the City Council, so our experts have developed detailed recommendations to mitigate their impact.

John West and Michael Kwartler explained their proposals, which include better protections of existing light and air regulations,  preservation of  existing midblock densities–the new tall buildings were intended for the wider avenues–and a greater priority on the creation of public open space.  Michael Gruen outlines the questionable legality  of selling additional density (bigger buildings) for money.

John West reviewed the unintended height of new buildings, on qualifying sites, if developers take advantage of both zoning lot mergers and the floor area bonuses available under the proposed amendments.  Below illustrates possible development at 360 Lexington Avenue, at 40th Street.  Following is a link to details on this and other examples.  E Mid – Hack (1) 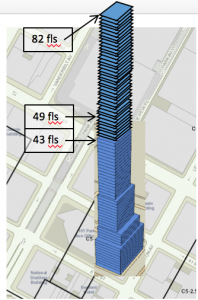 Larry Sicular reviewed the required financial contributions proposed for development right transfers, from landmark buildings to the new development sites, suggested that the present proposal offers inadequate guarantees that public improvements will be adequately funded, and suggested an alternate method for determining the amount of the “tax”.  TDRContributionsLetterhead