Last night I slept off my jet lag with 10 hours in bed, walked it off from my cousin’s apartment to the Old City, and then swam it off at the Jerusalem YMCA.

Jerusalem’s Old City retains its magnificence.  It is surrounded by medieval Ottoman and earlier Herodian walls, set off from their surroundings.  I have never seen a walled city of this importance.  The great commercial cities of Europe shed their walls—and this was never a commercial city.

The walls are surrounded by archeological sites, cemeteries, and plazas, walkways, parks and roads, widened and improved by the Israelis.  The Temple Mount sits high within, on a stone platform of ancient Temple walls.  It has been ornamented for centuries, since the Moslem conquest, by two mosques including the gorgeous Dome of the Rock.  (Despite my love of beauty, I decide to respect traditional Judaism, which does not permit me to visit. )  Mohammed ascended to heaven from the Temple Mount, and my guide tells me that Moslems (some, I later read) do not believe that David and Solomon were Jews or that the Hebrew Temple existed. 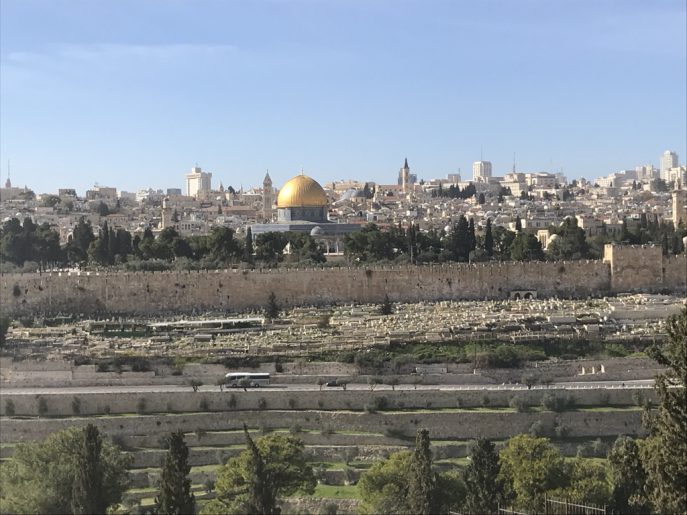 The Old City from the Mount of Olives

The Old City retains its holy sites, intertwined with competing narratives, its separate and ancient way of life, its holiness, its craziness, and its mystery.  Its narrow streets and shops cater to residents and pilgrims as they have since the First Temple.  Walking the narrow streets, past holy trinkets and souvenirs, I imagine Jesus walking past the money changers in the old Temple, intent on purifying and elevating Judaism.  Tomorrow I will tour the ancient tunnels under the Wailing Wall and see more of this. Otherwise I’d prefer to avoid the tensions of a place that has been prayed-in for three thousand years and fought-over since 70 AD.  After all we lived here for only a thousand -plus years.  Remembering the tragedy of losing it, we were nevertheless gone for nearly two thousand.

Beginning at some point in the 19th century, modern Jerusalem, Moslem, Christian and Jewish, grew up around the Old City walls, but it is not up against them.  Outside the walls, we saw or visited relatively poor Arab towns, on and below the Mount of Olives.  We visited important Christian churches and monasteries–where Jesus ascended to heaven (White Russian Orthodox), where Jesus wept for the future destruction of Jerusalem, where Jesus lied down before the crucifixion (Catholic), and where John the Baptist was born (Ein Karem). 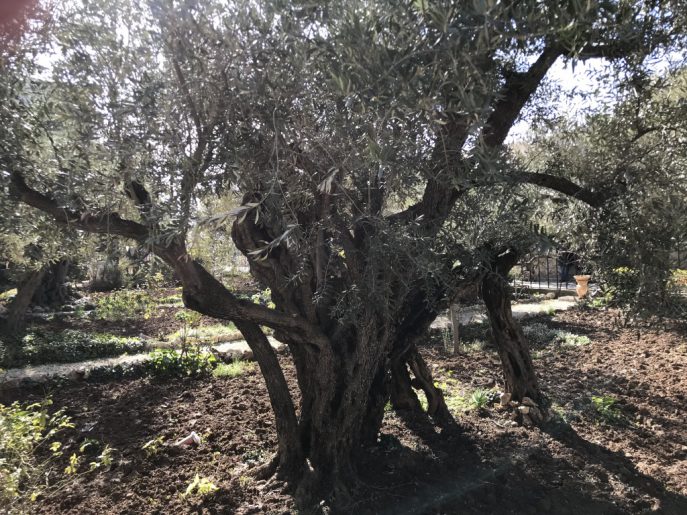 An ancient olive tree on the Mount of Olives

Then this weekend I saw the newer city that is Jewish Jerusalem and modern Israel’s capital.  I caught up with a childhood friend, Ilan K., met his family, heard their Hebrew, shared the warmth and familiarity of their family life, and had coffee with a distant Belgian cousin (Renee Ann G.) who settled here in 1971.  I visited new neighborhoods, new shopping centers, and re-imagined, nearby Moslem villages, Ein Karem and Abu Gosh.   Ilan drove me past the Israel Museum, the Holocaust Memorial (Yad Veshem), the Jerusalem Forest,  and the Herzl Memorial.  This city is less ancient,  less mysterious, less crowded, not always beautiful, but more comfortable and appealing.  The tensions and competing claims of the Old City are more distant.  The Arabs are no longer here, or seemingly more integrated into Israeli life.  This may not be the City on a Hill, but it is the refuge of the Jews and of more consequence and importance to me. 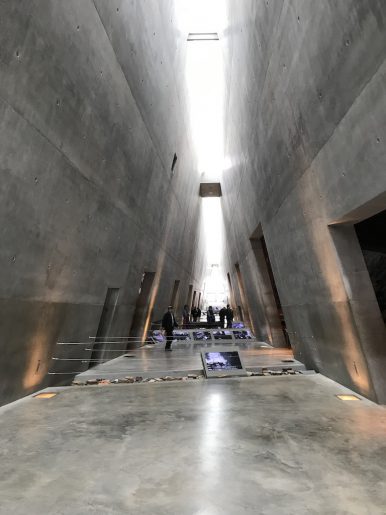