Posted on January 2, 2019 by larrysicular

Judaism is a fixed part of my life, although I’ve never emphasized it. I have used it to focus on other things—that is until the shootings at the synagogue in Pittsburgh which had an unexpected and negative impact.

As a first reaction, I wrote a brief essay on my limited experience with antisemitism and then started reading:  Paul Johnson,  A History of the Jews (a favorite); Ari Shavit, The Promised Land;  David S. Wyman, Abandonment of the Jews, Hannah Arendt, The Jew as Pariah, Amos Oz,  Dear Zealots Letters from a Divided Land, A Tale of Love and Darkness; Simon Sebag Montefiore, Jerusalem, David ben Gurion, Israel, a Personal History,  and now others.  For the first time, and with pleasure, I’m reading the Bible, from start to finish, although currently I’m only in Exodus. 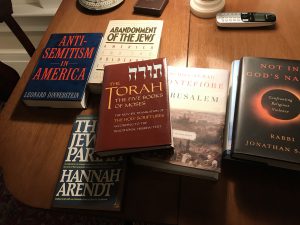 I’m at the beginning of a new exploration, but I do not know Israel.  I visited, but only briefly with my parents in the 1960’s, so I am going next week.  The trip now includes five days in Jerusalem, a possible day trip to the West Bank, two days at the Ein Gedi hotel near the Dead Sea,  a week in northern Israel, west of Haifa and then Acre, and 4-5 days in Tel Aviv.

Most compelling will be the people:  some I’m getting to know (two second cousins I met in New York);  family friends I have not seen in decades; cousins, several times removed,  I have never met, and perhaps others.

Israel is where Jews come from and where we began.  When I think of Israelis, I think of “them”, and I think of “us”.   Israel is a safe haven for Jews, even if we do not need it.  (Very few of us were welcomed to the United States, during and after the Holocaust, and many from the Middle East and Russia have gone to Israel  because they needed to do so.)  Israel has changed all of us.  We no longer vie or cringe for acceptance, and antisemitism need no longer define us.  Because we have Israel, we know, and the world knows, that when Jews are victims we can push back.  For us, Israel must exist.

But Israel exists because we founded or re-founded a state where others, not Jews, were already living.  Our state excluded or did not fully include them.  We reclaimed something that was taken from us, but arguably no longer belonged to us.  Time, war and memory have not yet remedied this.  And so what was achieved is marred by something wrong at the beginning—and will continue to be so until we find a way to correct or compensate for it.

Of course, this is not for me to decide, or rather it is not primarily for me to decide.  I do not live in Israel; I have made no sacrifice for Israel; and I have no knowledge of insecurity.  I am fully embraced by a country that does not hate me, and where my personal security as a Jew is generally taken for granted.  I live in a society that is not defined by religion, and that is how I prefer it .

But here too I descend from a people that took its land from others and with no prior claim or disaster to justify it.   All Americans, even those we view as oppressed, have benefited from a country founded and taken by force. We rarely talk of it, because the implications of doing so are too great.

So my views on Israel should be based on introspection and care.  I am descended from two peoples who found refuge and who took from others in order to be secure.  I cannot disassociate myself from Israel, because I am a Jew, nor from America,  because I have inherited and implicitly accepted its benefits.  And in my view, I cannot be whom I need to be without considering both the light and the dark side of what was done for us.  I can think, I can speak, I can even participate, but I cannot easily judge because I have made no effort to put my country, the United States,  in order.