I am a Jew- should I be afraid?

The shooting of eleven people at a synagogue in Pittsburgh pushes me to re-examine my identity.  The Anti-Defamation League reported a very large increase in anti-Semitic violence.  Should I be concerned?

Earlier in the week, I was listening to an interview on a Christian radio station.  The guest wanted the evil of Roe vs. Wade to be reversed by the current Supreme Court.  He was also asked about the killings in Pittsburgh and the reappearance of anti-Semitic rhetoric and violence.  His answered that he would discuss the sources of anti-Semitism on the next show.  Should I have worried at the lack of immediate condemnation?

Every time Jews are murdered and the killer references anti-Semitism,  or when anti-Semitism re-enters the mainstream, all of us have reason to be afraid.  However,  Jews are not the only focus of resentment.  It  is blacks in Charleston, whites and Latinos at a Baptist Church in Texas, concertgoers in Las Vegas, gays at a club in Florida, children at an elementary school in Connecticut and, a few days ago, college students in Thousand Oaks, California.  Many are rightfully concerned, but we have a national problem that does not uniquely target Jews.

My sister and I were raised in northern California in the 1950’s and 60’s, in a place and time where anti-Semitism did not exist.  There were so few of us.  Ethnicity and religious differences were rarely topics of conversation, and I was even asked whether Jews celebrated Christmas.  I had all sorts of friends, mostly non-Jewish.  There were many things I worried about, mostly school, my friends, my not-yet-formulated attraction to other boys.   I didn’t worry about my religion.

It was at home that I learned to be different,  a refugee history, a strong emphasis on education, on history, on breadth of experience, a parental insistence that what other people said or did was not ever an excuse for our behavior, and a concurrent directive, never articulated, to assimilate or “fit in” — to be athletic, accomplished, a good student, friendly, attractive, respectful to adults. . .  all were too much for me to entirely accomplish, but not because I was a Jew.

It was shocking as a young man to meet traditional anti-Semitism.  In Paris in the early 1970’s, I was asked whether I was a practicing Jew, in a context that inferred that a non-practicing Jew was preferable.  And my Jewish and partly-Jewish friends told me that this identity was generally not discussed.  At Princeton I learned not only that old-line Anglo-protestants were the superior social model, but also that “New Yorkers” (to some) were relatively less desirable.  I remember distinctly negative remarks about “them” at my eating club, during the annual “bicker” or member selection process.  The  desire to “fit-in” to the elite couldn’t keep there; with several other friends, I left the club and ate elsewhere during my senior year.

In San Francisco in the early 1980’s,  Jewish families, some dating from the Gold Rush, were active and prominent, and again in my home state my background was an advantage or of no particular concern.  But moving to New York, in the mid 1980’s, I saw that unassimilated Jewishness was “lesser” and that making clothes was less desirable than manipulating money.

Now of course (even then)  Judaism has become a symbol of power and influence in American life.  It is partly because of the power and independence of Israel that we are no longer viewed as a victimized and despised people.  We needed Israel, even in America, and it is fear and the determination to never let the past repeat itself that has transformed us from a victimized to an arguably victimizing people.  The old anti-Semitism came from our rejection of Christ and the determination to retain our own distinct beliefs and identity.  The new anti-Semitism reacts to the same distinctiveness and to the positive and negative effects of this determination to never again be its victims.

I do not want to live in a country that is defined by race or by religion.  Until now, the United States has been the model of the heroic, non-sectarian state, the country that gave me everything.  Since the Second World War, Jews have been strongly represented in intellectual circles, in the arts, in business.  Arguably the most successful of minority groups, we have asserted and earned the right to be different and the right to “fit-in”. 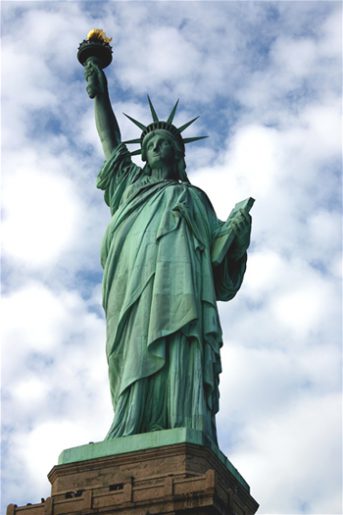 Symbol of our country. Inscription at the base by Emma Lazarus. Image by Bhutti at English Wikipedia.

In New York many of us are privileged, prominent, well off, rich, concerned with the rights of others, confident, generous, even arrogant. We have shaken the inferiority of our ancestors, even that of our parents who were the first Jews fully accepted in the nation’s mainstream.  In New York we have our own social groups, our own references of accomplishment and success; we dress and consume just a little bit differently than the privileged who preceded us.  For generations we have had our own institutions and schools; but we are now also strongly present in the institutions that excluded us.  We have almost forgotten our long history as Christendom’s most hated minority.  That is perhaps until now, where if anyone can be a target we will definitely be among them.  (Even in California, our mother taught us that the German Jews were assimilated, but that it did not protect them.)

In the present landscape, the targets of anger and alienation vary, but nearly all of the killers have been disaffected white men.  How is it that these men feel angry and powerless?  Clearly many white men in this society hold a lot of power, but others have much less of it or feel that they are losing it.  Unfortunately, the progressive left appears to be more interested in criticizing or demonizing them than in addressing their alienation, embracing, or including them.

In truth, very few in this society have real personal power.   Many sacrifice their integrity, individuality, or their manners in the presumption or pursuit of status or money, and daily we watch our “leaders” sacrifice their personal authority to stay “in power”.   (Please, we can do more than invite women and minorities to participate in this “privileged” craziness.)

There is something wrong with a society that allows shootings to continue, while refusing to correct itself.  And the only existing deterrent, subsequent punishment, does not seem to matter to the perpetrators who are profoundly alienated. What can correct the present state of affairs, if violence is a symptom, not the cause, and if gun control is sadly only part of the solution?

Our narrative must change.  Each of us must accept that we are different and yet want to “fit in”.   How we do this is part of our personal evolution, a common struggle self-actualization and community that occurs in everyone.  In seeing this, we do better to love and respect the same struggle in others–as individuals, as groups and even as white men–and to see that every person’s personality and history will lead down a different road to a different resolution.  Only then can we suspend judgment, refuse to stand in the way and perhaps help others get there.

4 Responses to I am a Jew- should I be afraid?