Posted on September 17, 2018 by larrysicular

After two months away, I landed at Newark late on a Tuesday night in early September and came home to a steamy New York.  Customs and baggage were uneventful, as was the taxi ride home, a “mere” $100 including tolls and tip.

Other cities have grown in relative importance, but New York still has that undeniable concentration of financial, intellectual and cultural clout that holds onto people like me.  Just recently aged 65, I am often overwhelmed by the crowding and unreasonable expense of living here.  Yet I try to adapt, drawn to the continued possibilities of the place, unwilling to throw in the towel or retire.

Temperatures hit 90 degrees after my return, and the late summer dissatisfaction was general—on the crowded subway, as reported by our office receptionist, and even in a shared Uber car, where another passenger spoke of a headache in the heat.  New York has always had hot summers—Dad grew up here in Queens in the 1920’s and 30’s and said that many handled the worst of it by sleeping outside on fire escapes. 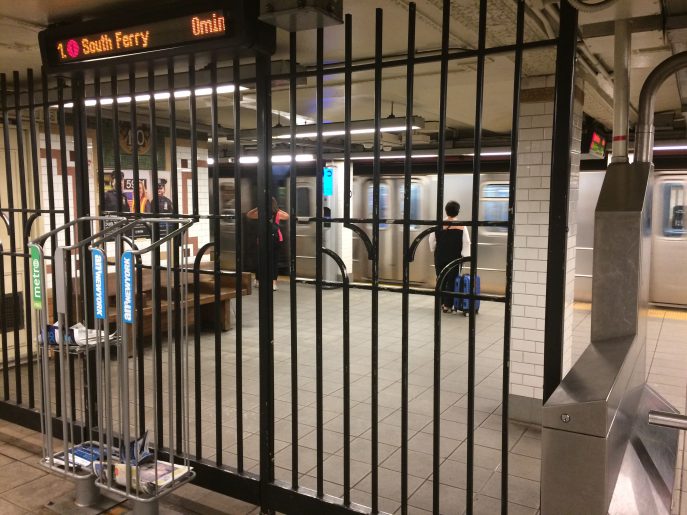 The 110th Street IRT station, in a moment of relative calm

Forecasters have predicted many more hot days, and the midday heat and lack of breeze becomes intolerable.  But worse is the oppressiveness of the subway stations, the grimy staircases and passages, steamy platforms and overcrowded cars.  These all seem even more unbearable when temperatures rise.  The climate is changing, and sea levels are rising.   But the urgency of these  issues is seen in the future rather than in the present.

New York is a big international city, increasingly rich and successful.  It is a magnet that draws poor immigrants from other places, the rich to its culture and elevated consumption, gay men and women to its freedom, and the young and ambitious from abroad and across America to opportunities in the arts, in theater, in finance, in high tech, and in dating. 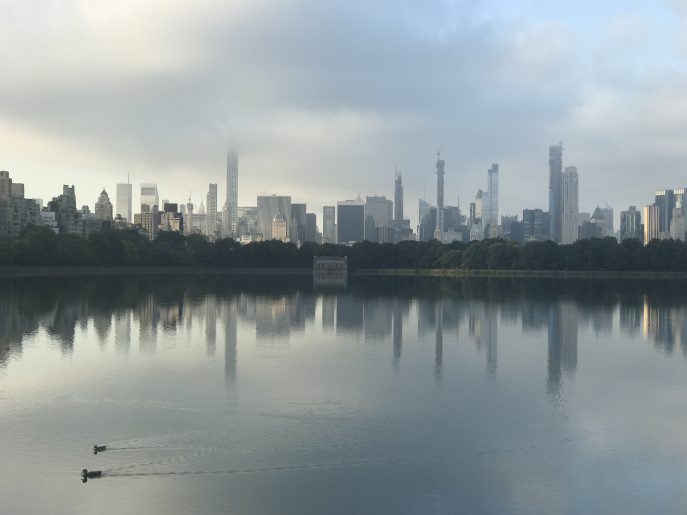 But now the city is bursting at its seams, suffering from its success. The density overwhelms us with increasingly difficult traffic and ever-taller high-rises everywhere, not only in Midtown, which has been rezoned for super-tall-super-bulk new office buildings, but also in residential neighborhoods that are being up-zoned to encourage low income housing.

When the offices become obsolete and the new housing is still inadequate, will we be build still taller?  City Planning believes that density is a positive good, but certainly there is a limit to how much is good.  Is building new, 70-story, energy-efficient office buildings really energy efficient? 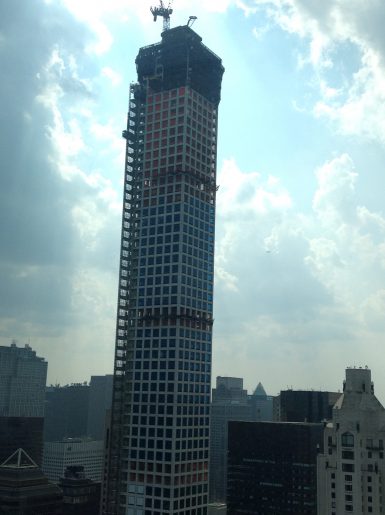 New York has been overcrowded before.  The walk-up tenement districts of 19th century New York were extremely overcrowded, and the solution was elevators, to build up, and subways and trains to move uptown and out-of-town.  Now however the city builds up, hardly adding to the subways and trains that drive development outwards.  Infrastructure improvements aren’t keeping up, and the streets, sidewalks, trains and museums are increasingly difficult to negotiate.

This was a  country of  big thoughts and big spaces, but our vision is now needlessly limited, and New York has lost its imagination for big dreams and big projects.  Instead is residents are increasingly squeezed and doubled up, and those deciding these things tell us this is good.  It is remarkable that we live in a city so rich, so unbelievably rich, yet with so little will for fundamental improvement and so little imagination for large public projects.

The city’s present problems are not limited to infrastructure.  Many do not have places or adequate places to live; many city schools are substandard; access to health care is uneven.  In the periods of its greatest growth, New York has often had ample room for poverty and suffering.  However, in an increasingly progressive and civilized society, this has become unacceptable.  Yet we are unwilling to agree on how to change what we do not accept.

The New York Times reports frequently on malfunction and overcrowding in the subway system.  Of the two heavily-used train tunnels under the Hudson, connecting New York to New Jersey, one may soon have to be closed.  Yet work on the subway system is slow and underfunded, and a replacement tunnel is still in the planning stages.

To alleviate some of these problems, we allow developers to build-up on private property, or we add new high-end buildings on public land in the Hudson Yards, a game that promotes development and increases real estate tax revenues, but where we never seem to catch up.   At the same time, every need is viewed as primary, every budget constraint as unjust or unfair, and every tax increase as unreasonable.  We avoid the difficult decisions and believe that others, the federal government, the rich, the unions or ineffective teachers ought to pay.

Thus the city is periodically strapped for money, never ever able to fund or execute all that we demand of it.  And it is likely that its progress will remain stymied and minimal unless there is some support and re-prioritization by all of us.

Or alternatively, we can wait for the present to overwhelm us.

This is the first in a short series of articles examining possible solutions to New York’s seemingly insurmountable issues.  I am doing this by interviewing experts in planning, development, finance, and transportation.  Each will be spending sufficient time with me to develop a coherent approach or proposals.