I have taken a break from writing about France, partly from fatigue and partly from the fear that what I am sharing has become too personal.  But I am increasingly overwhelmed by the power of what I am seeing, and so have returned to my laptop.

First I am focusing on the place where I am presently writing, a house in a town in lower Normandy, in an area known as the Suisse normande, due its relative hilliness.  I am visiting Carolyn Douglas a friend and classmate from New York, who is here with her husband John, son Ben, a cousin and a niece, in a large, elegant house that was built and enlarged in the mid and late 19th century.  The house and its furnishings, inherited by Carolyn’s mother and her sister, through a lengthy line of mothers, photograph life as it was comfortably lived by the haute bourgeoisie, prior to the Second World War and for some years thereafter.  During the occupation, it was taken over by Nazi officers, and Carolyn’s great-grandparents were eventually forced out, to a year of wandering through hayfields and farms, which they fortunately survived.  But the house was not damaged and its furnishings and gardens have been preserved.  I have had two wonderful evenings here, with drinks in a nearly-square library, and dinner in a large dining room.  Annette, the cook, is a special, friendly woman and the food is in her words simple and fresh.  If only I can reproduce it. 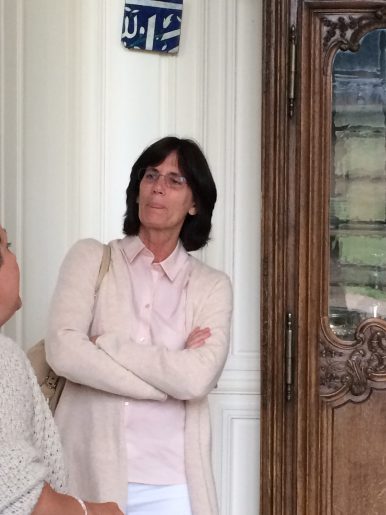 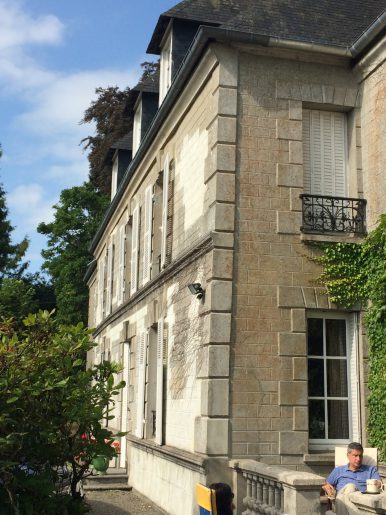 Carolyn’s husband, the terrace and the house in Normandy 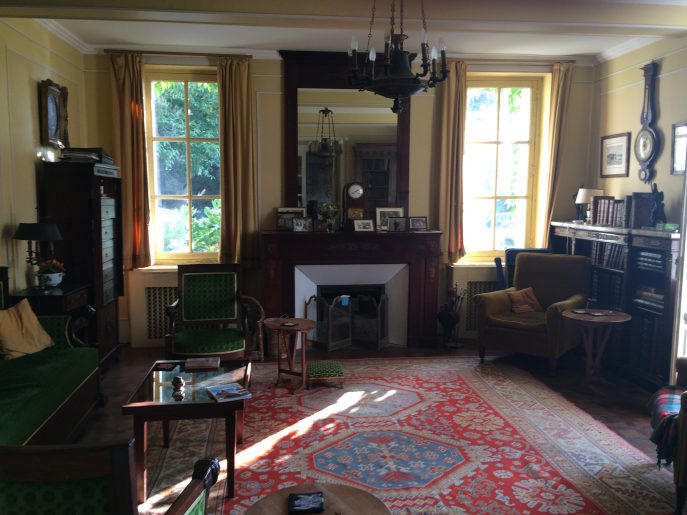 On Saturday, August 18, I took the high-speed TGV from Paris to Nantes, a local regional train to Pornic, and then a car to Prefailles, a small 19th-century seaside town on the south coast of Brittany, where I spent five more-than-pleasant days with Francois and Claude Marion, their son, Sebastien, and his family, Claude’s sisters, Michele and Cecile, and various other grandchildren, a partner and friends.   I have known and loved this family for a very long time. 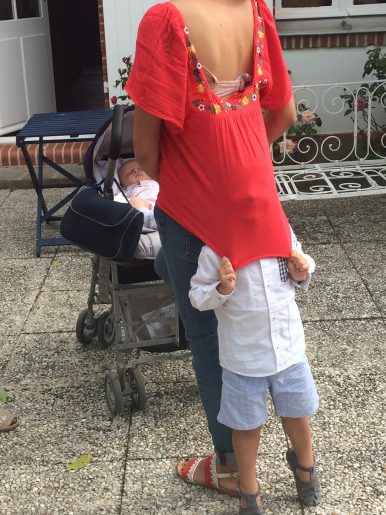 Lunch is every day in France, and typically at one o’clock, when on holidays and weekends, everyone sits down to a full meal, including an entrée, main course, and salad, then often a cheese course and dessert, followed by coffee.  From the American perspective, these meals are time consuming, as they cut into the middle of the day, but there is pleasure in shopping in outdoor or covered markets, and in modern supermarkets, and in preparing (or watching the preparing) of food.  Most importantly it is the pleasure of the lengthy conversation at the table.  Then, more informally at dinner, the talking continues.  Again, we might find this to be a lot of eating, but breakfast is very light in France, and lunch and dinner portions are not large.  There is a great deal of emphasis on taste.  There is wine, but not always, and my friends drink relatively little.

Francois and Claude serve lunch in the garden, as weather permits, as did Eric and Anne-Genevieve de Saint Germain, on the terrace of their house in Dinard (on the north coast of Brittany).  Anne and Jean Elie served coffee, after lunch, on their lawn in Hermanville-sur-mer, on the Normandy coast.  All three houses have walled (stone) or hedged gardens.  And so setting up and eating or drinking outside becomes part of the effort and the pleasure of the meal, which needs no further justification.

Dinard, on the north coast of Brittany is a striking seaside town, overlooking cliffs and beaches and an intense emerald colored English Channel.  The many, many, often-large and tall, 19th century houses have walled gardens, on streets and squares or on narrow, charming alleys or lanes.  Many were built by the English who came here, for sea-bathing and leisure, in the late 19th century.  There is still a casino, which no longer looks too interesting and a 50-meter saltwater pool.  I had not been in a saltwater pool since the 1960’s, and had forgotten its additional buoyancy.  The effect of Dinard is of a small, old-fashioned, privileged city, yet with lots of public spaces and beaches, many summer visitors and a crowded and fabulous weekend market.   However while in Dinard, I focused almost exclusively on my friends and took  very few good pictures. 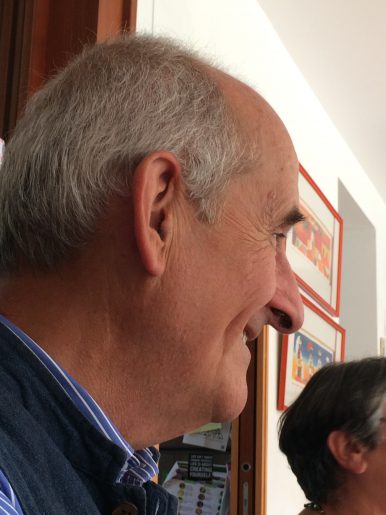 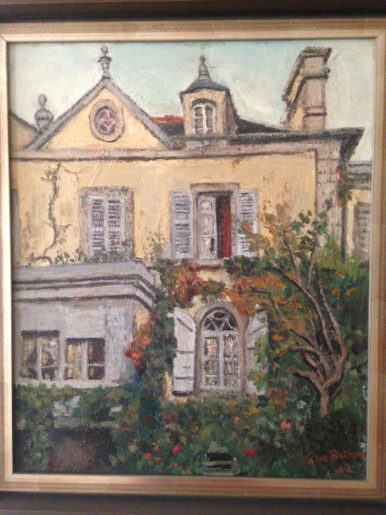 Anne Genevieve’s house in Dinard, formerly her parents’, as painted in the 19th century

After Dinard, I visited Anne and Jean Elie in Hermanville-sur-Mer, another small, beach town, this one on the Normandy coast.  The English landed on this beach in June 1944, and their house was used by the Germans as a defensive gun position.  The house and its immediate neighbors, survived the shelling and the landing, but the allied invasion moved inland.  Jean himself, now just 85 and an 11-year-old in 1944, fled the nearby city of Caen with his family and lived in the countryside for two months, to escape the fighting and the bombing of the city. 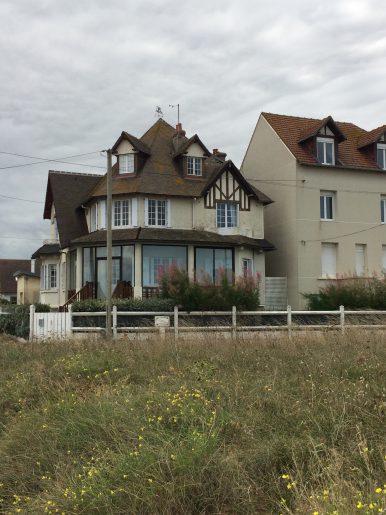 History lives of course in this part of France, in many 19th century beach houses, in the much older villages, walled chateaux and churches visible from the road (some dating to Norman times), in the hedgerows, and in the memory of the two great 20th century wars.   The Normandy landing was the first step in the liberation of France and the invasion of Germany.  Of course Americans too were heavily impacted by these wars, but they took place in Europe, and I am writing this in Normandy; the memories are physically present here.  But they are also proximate elsewhere.  Anne Genevieve and Erics’ fathers were prisoners of war in Germany.  Francois Marion and Anne Elie’s mother, Andree, traveled into the mountains above Lyon to get fresh food.  Other friends’ grandparents were visited by the Gestapo in Paris, but their mother had learned German, and the German officer suggested that they leave immediately for the countryside.

Anne and Jean invited me some years ago to visit them in Hermanville, to see the beaches where American, British and Canadian forces landed in June 1944.  I was finally able to visit them this summer.  On our first afternoon together, with three of Anne’s grandchildren, we biked into the village, and visited the old Romanesque church.  Then we headed to the British cemetery nearby.  Jean explained that the British set up a number of smaller cemeteries after the war, whereas the Americans consolidated the graves of our war dead, to a very large one at Colleville-sur-mer, overlooking Omaha Beach.

At the British cemetery there was a monument, and a visitors’ book, which I read through briefly.  One entry was written by a woman from West Sussex, England who brought her 95-year-old father, and after reading it I was very moved by the strength of the love it describes.

“Probably the last year I will bring my Dad—he visits the grave of Derek Wright. . . his second wife’s wartime sweetheart.  When May died 24 years ago her ashes were buried in Derek’s grave. Dad has visited every year since on May’s birthday.  I(n) remembrance of Derek and May who never found the happiness of marriage and family together.”

The next day (after lunch), we drove to the cemetery at Omaha Beach.  There are thousands of crosses and some Jewish stars and clear and impressive monuments.  This was August 28, and at 5 o’clock, two American flags, were raised, from half mast, to full height, before being lowered in honor of Senator John McCain.  Jean then drove me to the Pointe du Hoc where, he explained, many American soldiers had died scaling cliffs to take down a German gun position. 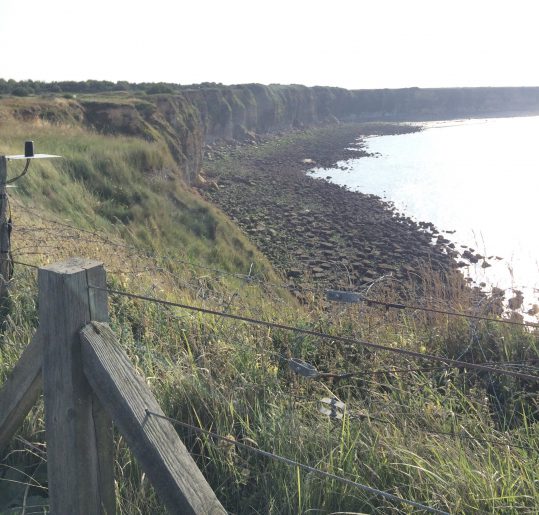 This is what our soldiers climbed on the Pointe du Hoc.

Seeing all of this is a reminder that that my life is due entirely to the United States, who saved my mother when her family fled from Europe and added its power to that of the alliance,  defeating the Nazis.  Even my present disappointment does not lessen a fundamental belief that I am obligated.

Before the visit, I wrote my maternal cousin Stephan Greene, to ask about his father, George’s, landing in Normandy. He reminded me about George’s memoirs, which I had never entirely read.  But they were saved in my laptop, so that evening I read them to Anne and Jean and the children.  I’m not sure that the children understood it, but the three of us did, and for me, it was an important circle backward.

George, a Jewish refugee from Austria in 1939, was inducted into the US army five years later and landed on Utah beach a few days after the first wave of the invasion in June 1944.   Working as a technician, a surveyor and a translator on the front, he participated in the liberation of France, the Battle of the Bulge, and the invasion of Germany before returning to New Jersey. His sister, our mother, was the only one at home when he arrived unannounced.  His mother, our grandmother, hugged and covered him with kisses, which he remembered as he wrote this in 2010, and his/our Aunt Eva gave him a new, then very expensive, ball point pen.  (My uncle was grateful and in his retirement made the large stained glass windows in his synagogue.)

His younger brother Jack also fought in Europe, was wounded and rewarded the Purple Heart.  He left no memoirs, and preferred not to talk too much about it, but my cousin Elliot Greene has written “that being Austrian, he and George were given the opportunity to serve in the South Pacific, but chose to go to France to fight the Nazis.”  He also wrote that “Neither George nor my father were citizens at the time.  I’m not sure if George was included [editor: turns out he was not], but apparently some officers in France discovered that these young boys (my father would have been all of 20 in 1944, George 22), who were not citizens, were fighting for the U.S.  My father was brought to the US Embassy (Paris?) and given US Citizenship without a test and without waiting.”

(I am adding to this article on December 8, as my mother’s cousin Jack Herschlag has written to advise me that Jack landed in Normandy on D-day, “late in the day, as he said, not wishing to appear too heroic.”  He was wounded in France and taken to a hospital in England, where the bullet was removed surgically.  Once recovered, Jack rejoined his unit, then in Belgium, and earned the Bronze Star.  The medal helped him get the paperwork done in Paris.)

Now completing my trip and return to France, I’d like to thank my uncles for what they did for me and apologize to them for taking so long to realize how important it was.

16 Responses to The War