I was heading back to Paris, by high speed train from Amsterdam remembering my first visit many years ago.

Paris was not on my first trip to Europe.   Mom took us to Rome in about 1967 and maybe to Venice or Florence.  Then, ill-advisedly, we went to Vienna, where she was born, and then to a hotel on one of the lakes in Austria.     (Frau Professor, the innkeeper called her, annoying her to no end.)

It was on the second trip, five or six years later, returning again from Asia, that Dad took me for a brief first visit to Paris.  (Today, August 15, would have been his 97th birthday.)  We stayed in a small hotel near the Place Vendome, and one evening I walked to one of its grander hotels and used my high school French to talk with one of the bell boys.

Now, many decades later, I am back in a city where I lived and have visited many times.  Alexandre M. and Dorota K. have lent me their apartment on the rue d’Aligre, which is in the 12th arrondissement, within walking distance of the Gare de Lyon and adjacent to the marche d’Aligre, a covered and outdoor market open mornings, or mornings and afternoons, except Monday. 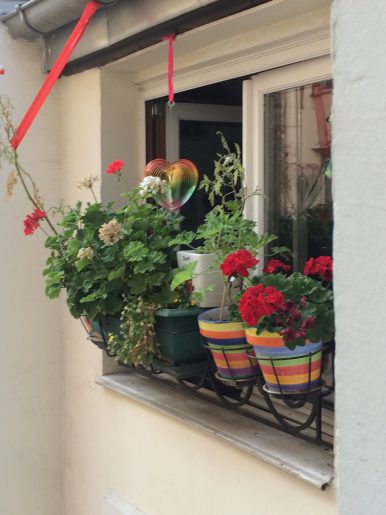 kitchen geraniums on the rue d’Aligre

A very friendly cab driver takes me to the cleaning lady to pick up the key, then back to the apartment, and while I have been here before, I am thrilled.  It is in a garret, under the roof of a small three-story building that dates from the late 18th or early 19th centuries; the living room is under a long, sloped roof-line, with skylights, bookshelves and a desk; and the entry, kitchen and guest bedroom face a small, bright courtyard, through red geraniums in pots and planters.  The kitchen is my favorite room, with two rows of counter, each with upper and lower cabinets, a dishwasher, an oven, a cook top and a table under the window.

It is curious to think back to when travel was a rarer privilege, when we dressed up for the plane and had pleasant conversations with the strangers sitting next to us.  Before the reasonable discount fares and the long security lines we have created, seemingly before every interesting city had become a tourist mecca where we go to see each other, and certainly well before young people posted self-congratulatory messages adding up the considerable number of countries they have visited.

So I am particularly happy to get up this morning, and to walk out to a market square where people come to buy food and to have many choices.  Yesterday I walked into the covered market, where a number of the shops are closed for the August holiday, their metal shutters drawn down.  But many are open, a couple of cheese and dairy shops, a butcher, a fishmonger and a charcuterie.  I stopped at the last for a slice of country pate—made with pork, the clearly middle eastern young salesman told me.  There were a number of other pork products in the display case, but I did not ask the differences. 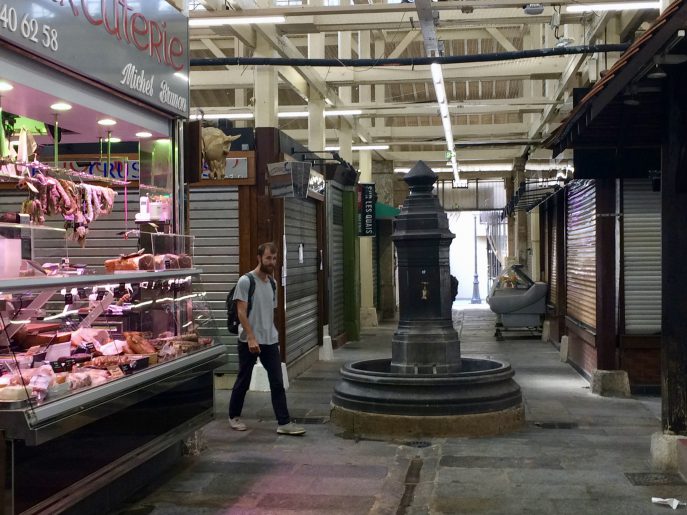 charcuterie and closed shops at the marche d’Aligre

Outside are vegetable and fruit stands, and these are also up and down the rue d’Aligre where I am staying.  I tasted a fig and an apricot—there are always tasting pieces available—but they were not so good, so I take a scoop of mirabelles, a small yellow plum en promotion.  Buy whatever is on sale, my friend Stefani counsels, it is always the freshest, and they are very good. 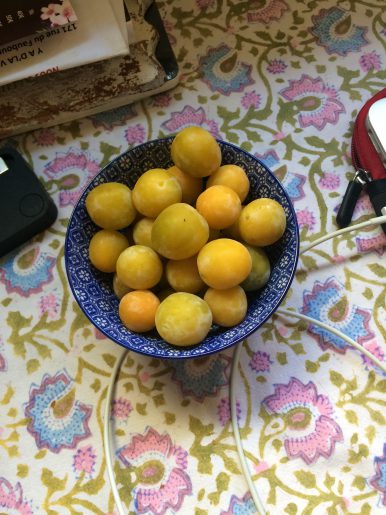 Behind the stands, specialty shops line the rue d’Aligre, a middle eastern butcher and pastry shops, a small, modern, organic market, a bakery, cheese shop, wine store, etc.  One night I bought a rotisserie chicken at the butcher, and we had a fairly long conversation.  Private schools in Paris, he said, are expensive—I think he said 350 to 400 euros a month, depending on how many children you are sending.  A few doors down, another store sells regional specialties, a higher grade version of Nutella, a very good apple juice, mustards, a reasonably priced wine.  According to an authoritative source,  on the rue d’Aligre or within a block of the apartment, there are . . .

–5 bakeries including one specialty, Algerian bakery

–2 cheese shops and 2 more in the covered market

–6 butchers on the rue d’Aligre of which 3 are halai, plus 4 more in the covered market (one specializes in fowl)

–a number of spice shops

–at least three restaurants listed in the Michelin guide.

Although resisting, I am venturing out.  First to the swimming pool at the centre de Reuilly and then back along the Coulee Verte Rene-Dumont, formerly an elevated railway line, now a landscaped park that preceded Manhattan’s High Line.  The difference is striking.  While the High Line is crowded with visitors and expensive new condominiums, the Coulee Verte is quieter and more spacious, as it connects with adjacent parks.  The buildings along it are sometimes innovative, not as new or as pristine.  The people seem to be a mix of visitors and people from nearby, using the Coulee to go places. 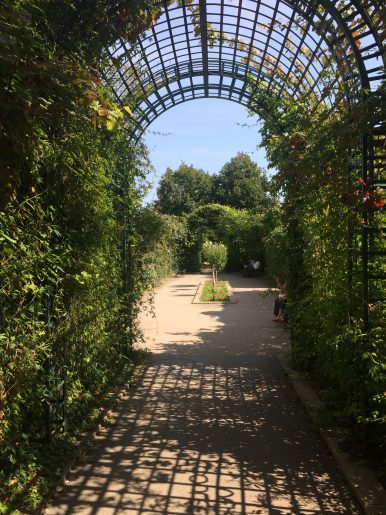 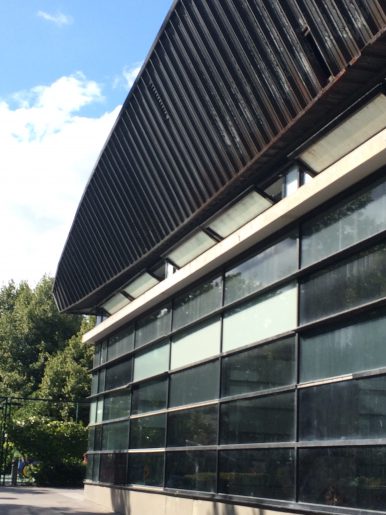 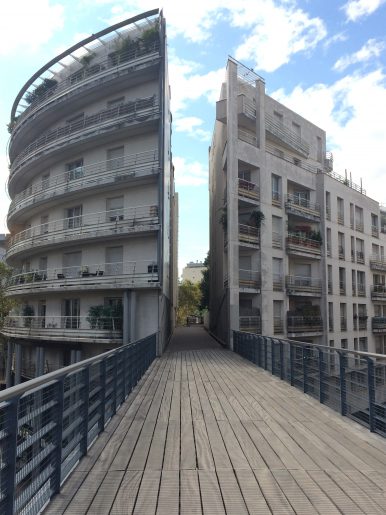 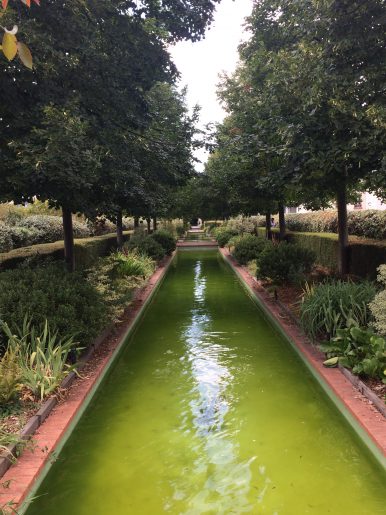 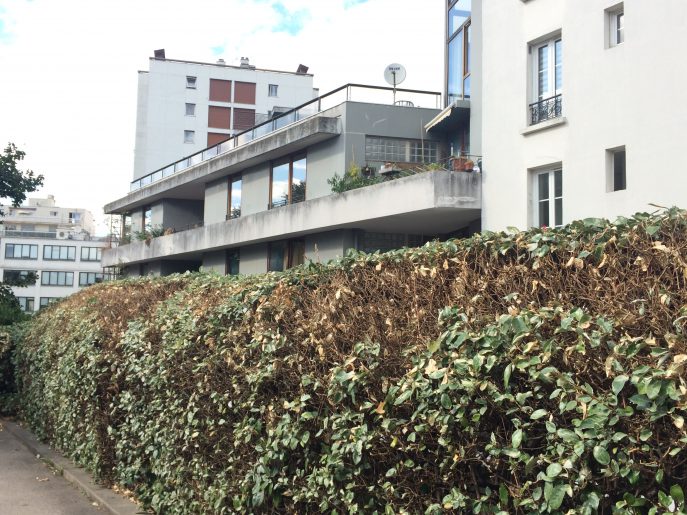 Later, its with Catherine, to the peaceful Musee des Arts Decoratifs on the rue de Rivoli, (next to the very crowded Louvre) where we spent a fair amount of time looking at medieval statuary and where she taught me the meaning of the term “annunciation”, a delicately carved 18th century, walnut paneled room, a number of very beautiful things made in the late 18th and very early 19th centuries, and a number of very ugly things made in the late 19th century. 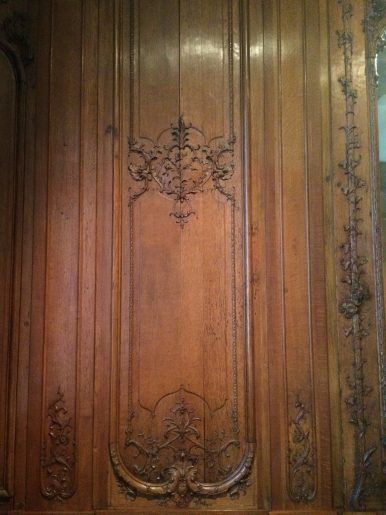 Then at my suggestion, we walked further down the rue de Rivoli to café Angelina, and a table in its high-ceilinged, worn and gilded, belle epoque rooms.  Its specialties include Catherine’s very intense hot chocolate, too sweet to my taste, and a dessert I always think about, the mont blanc, a confection of chestnut paste, whipped cream and meringue.  It is August, and the place is filled with other tourists, but the rooms set the mood.

Unfortunately, the rue de Rivoli’s arcades are marred by overflow display racks from tourist shops, mostly clothing and stuff.  Catherine and I marvel that the city permits this invasion, but concede that the stores would not survive if people were not buying.   A compromise solution—stores for everyone, where products are shown behind plate glass windows, the elegant arcades restored.

Today, I walk old haunts in the Marais.  My favorite, the Hotel de Beauvais, was built for a woman, who was said to have been Louis XIV’s first mistress, and is now an appeals court.  It is the inner courtyard and its petit escalier that I admire, but its massive outer doors are closed for the August holiday.  So I settle for the much better known Hotel de Sully, and marvel at the symmetry created on its uneven site, on the courtyard and garden facades, and on the rear garden doorway, which leads directly to the arcades of the Place des Vosges. 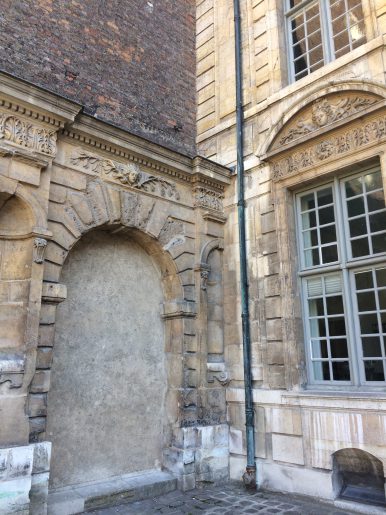 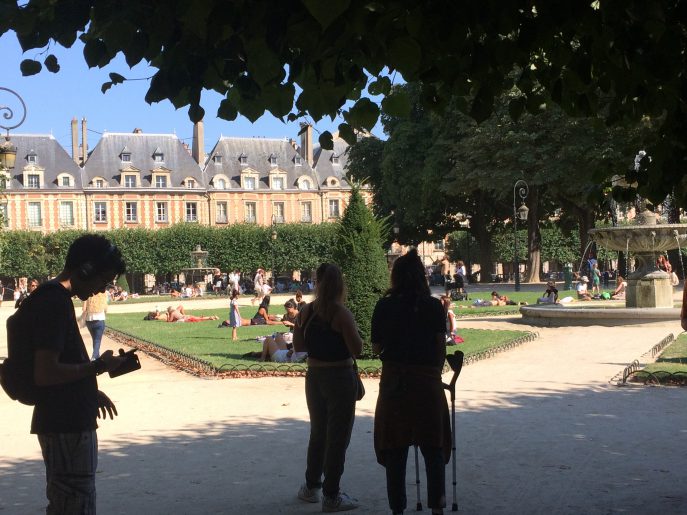 Here of course I am sharing space with growing numbers of people, but enjoying it until I start to turn left, on the north side of the square, to the rue des Francs Bourgeois, where I see a crowd of shops and visitors, and so leave the square and head back to the comfort of the rue d’Aligre.

These comments are dedicated to Alexandre, to Dorota and to Catherine, for sharing wonderful places.

Prefailles, edited after lunch and a nap at Alexandre’s parents, August 21, 2018