A side trip to Amsterdam

I’ve taken a side trip to visit some younger friends in Amsterdam.  I know them from the year they spent in New York—Brune, the daughter of friends in Paris, and her boyfriend Frederic, working respectively in solar-panel marketing and on-line auction sales, jobs that didn’t exist when we were young and reflect Amsterdam’s start-up culture.

They live in a quiet, residential neighborhood known as De Pijp, which consists primarily of five and six story brick buildings, many on winding streets, most of which appear to have been built from the 1930’s to the 1990’s.  Many of the apartments have doorways to the street, a reference to the individual townhouses that still populate the older sections of Amsterdam.  The streets are a series of doors, and thus largely occupied.

My last visit to the Netherlands was in the late 1970’s with a friend whose parents had a house in The Hague.  There, I remember a tall staircase, reminiscent of those I later saw in townhouses in New York, and a reminder that in the United States, 19th century urban architecture was derived from what the Dutch and the English built.

Brune and Freds’ doorway and bicycle

That visit to Amsterdam, was very brief, so I do not know the city.  This time, for the first two days, I recovered from previous weeks, staying close to my friends’ apartment, writing and walking the neighborhood.

There is a commercial street a couple of blocks away, Van Woustraat, the kind I like, with a barber/hair dresser, Asian market, nut-roasting shop, bakery, organic market, coffee shop. . . everything is different and most of it is unique.  The center of the street is torn up for some kind of infrastructure work, adding inconvenience to its charm.  The first afternoon, I found a one-off place, but with windows and long tables, like one sees at a Pain Quotidien, and I ate smoked mackeral on dark bread with some kind of berry jam.

As a gay man, it is impossible to walk Amsterdam without noticing the relatively numerous, tall, gorgeously blond men (and women).  Reminding myself there are many different types of good looks, and that blondness is no longer the standard of beauty, does not lessen their impact.

As an American Jew, I am reminded of the importance of Holland in our history, a country where we were welcomed and prospered, while repressed or excluded elsewhere.  As children, we were taught that Holland welcomed a Jewish/Sephardic community escaping the Inquisition in Spain, that we/they built an important business community here, that some of our/their number founded (via Recife, Brazil) the first Jewish colony in New Amsterdam, that the Dutch West India Company insisted that Governor Peter Stuyvesant accept us/them, and that our oldest Jewish synagogue still standing is sephardic and in Newport. 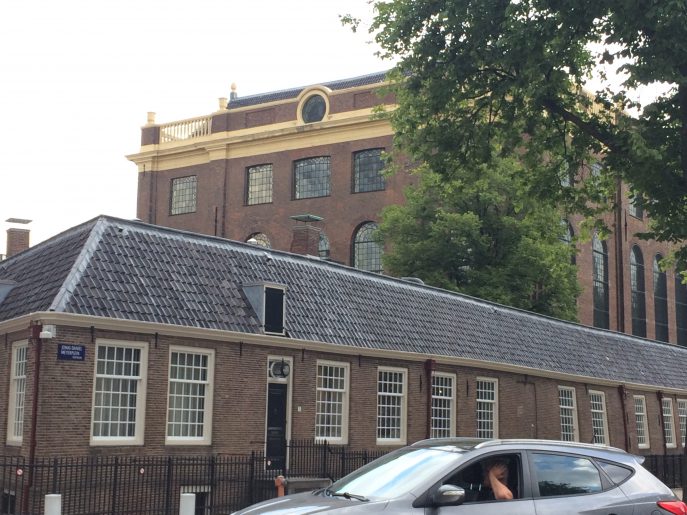 the Portuguese synagogue and its service buildings

At the Temple Emmanuel religious school (the one in San Jose), I built a model of the Newport synagogue.  I am reminded of this during my visit to the much larger, beautifully preserved Portuguese synagogue in Amsterdam, which clearly inspired it. 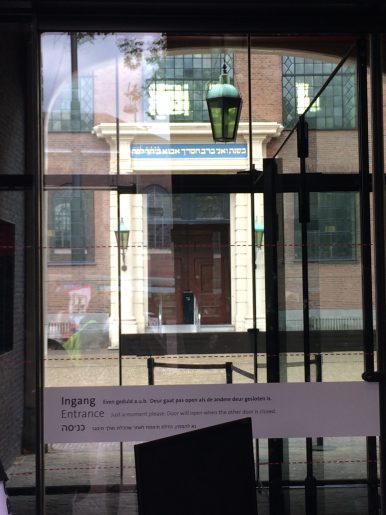 Jewish history in Amsterdam is also tragic, and that too seems to be amply observed.   Walking to the synagogue, the names of those deported, during the 1940’s, are on plaques along the canal, opposite their houses.  The Dutch saved many of us, but many also cooperated.  And so I am reminded of my own history, of how few of us escaped, and why many of those who did (and those of us born to them) can never see Europe as tolerant or safe.

With the present alternate reality, in the United States, we may wish to reconsider.  Dutch tolerance seems present and easy in the considerable racial and national mixing in Amsterdam. Everyone is speaking Dutch (and everyone speaks English) reminiscent of the welcome tolerance inherited in New York and the real reason for our national being.

2 Responses to A side trip to Amsterdam