Posted on August 8, 2018 by larrysicular

It is impossible to convey my love for France without writing about the Vink sisters.  Both are now married, with husbands, children and grandchildren, but of course that was not how they were when I met them.

Therese was a charming, friendly, urbane young woman, working in Paris in the late 1970’s, formerly the girlfriend of a friend at Columbia.  Anne, whom I met a bit later, was almost a schoolgirl, neatly and conservatively dressed, with just a hint of the very glamorous, worldly woman she has become.

I thought I was a big deal at that age, raised in the Bay Area, living in New York, school at Princeton and Columbia, years with my parents in India and Singapore, and already a year in France.  But I was unprepared for the urbanity of the Vinks—Dutch father and French mother, raised in the Hague and Paris, years in South America, speaking easily French, Dutch, English and Spanish.  But it wasn’t only their languages; it was their refinement, their eclectic origins, their friendly manner, disciplined informality, and ease and willingness to talk with everyone.  If I could have wanted women, I would have been happy to have been chosen by either of them.

So we are friends.  There are actually four sisters, two in Holland, in Amsterdam and the Hague, and two in France (It is the French sisters that I know well.)   Therese married Jacques, a retired agricultural engineer, a great reader, a conservative and unconventional thinker with clarity and memory.  Anne married David, an American physician who fought infectious diseases at the CDC and the World Health Organization (in Geneva) and now continues to do so from London.

It is summer, and both sisters are near Lake Geneva (lac Lehman), Anne at her family house in Sauverny, France, near Geneva, and Therese at a chalet in the mountains above Evian les Bains, also in France on the south side of the lake.

To see Therese, I have taken the train from Lyon, with a quick change at Bellegarde, and Jacques is waiting for me at the station in Evian.  I can see from the train that the old 19th century Evian factory, romantically abandoned at my last visit, has been torn down for new apartments, not yet finished, with direct views of the lake.  Evian, a 19th century water-cure resort for the rich, has been revived, retaining much of its lakefront elegance, a few grand hotels and houses, a water spa, a wonderfully-restored funicular, and some of the less-interesting shops, café’s and smaller hotels that populate a place that many people visit.  Therese and Jacques are in Bernex, an old farming village about 600 meters above the lake.  The drive is sharply up, to a chalet at the end of a valley, where the hot weather cools down at night and where the Alps are close and present. 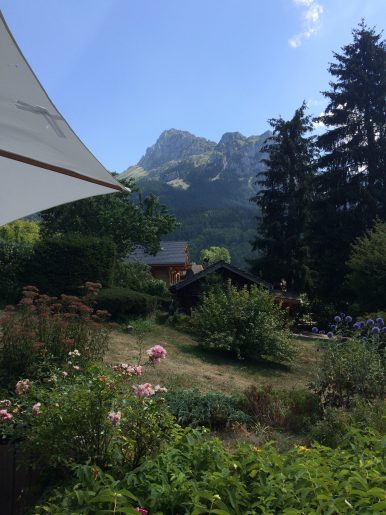 the view at Bernex 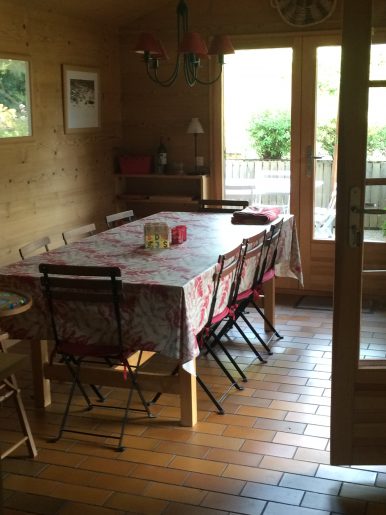 and the kitchen table

Jacques is French.  Therese retains her intriguing blend of refinement, open sincerity, and informality, but has spent her married life in France, and seems now more decidedly French.   Therese and Jacques have a daughter and two sons, and this summer the children are alternately with them in Bernex, where Therese and Jacques help look after their grandchildren.  Helene, their daughter, brings her children while her husband is recovering from a medical procedure; their son and niece bring their families from Geneva, to visit and escape the heat.  Their oldest arrives the evening of my departure, to pick up 18-month-old Gabriel, before taking him to visit his other grandmother in the mountains of Algeria.  Gabriel is a heart-toucher, starting to mimic a few words, charming and happy and affectionate and friendly, and just sometimes demanding and tiring.  Therese and Jacques feed, teach, nap and entertain him.  We were swimming and walking, eating, talking and watching him.  Therese and Jacques are private people, focused on family and good friends. 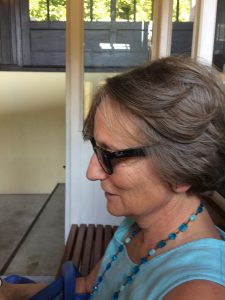 with Therese on the funicular

To Anne, I’m on the ferry from Thonon-les-Bains to Morges in Switzerland.  The boat is clean, orderly, quick and a bit expensive (27 euros).   David and Anne, at the other end, show me Morges and propose dinner in downtown Geneva at the Bains des Paquis, a worn, crowded, concrete, quasi-public beach, built on piers, with views to the entire city lakefront.  The place has a great energy.  Everyone is there: all classes, nationalities and races, and everyone is well behaved, even groups of young men.

We eat at an open, outdoor, casual restaurant, under awnings and right on the water.  Anne’s daughter Laura is there with her husband and two children.  Laura is clear-minded, accomplished, a Swiss-trained contract lawyer, very direct, open and independent, and by her thinking and delivery, the daughter of an American father. 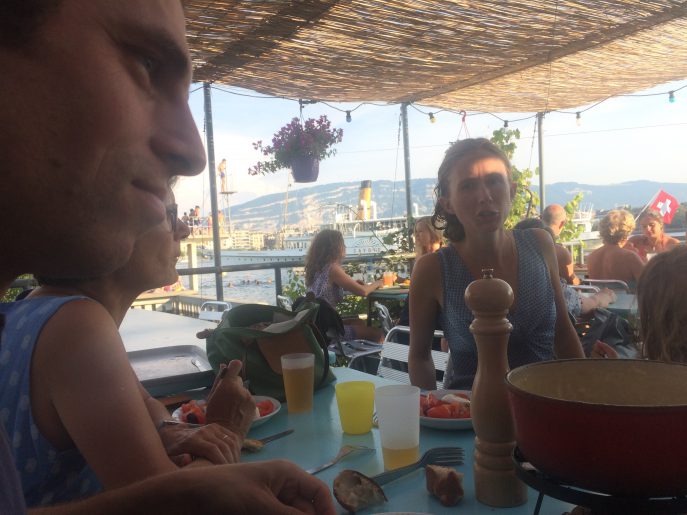 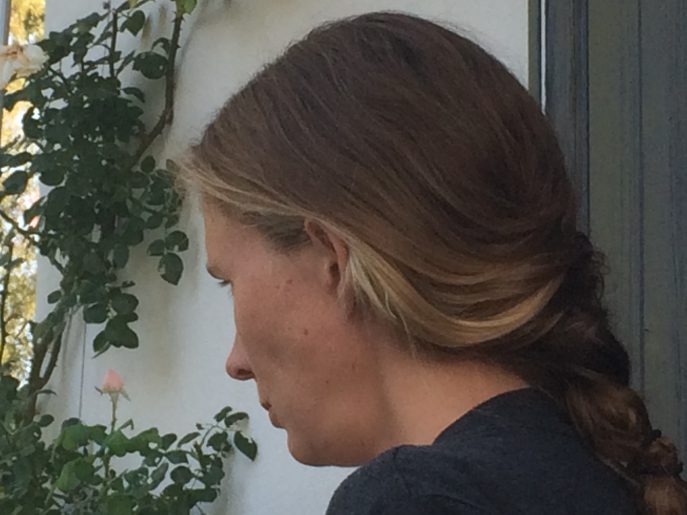 It is very hot and all of us are at the house in Sauverny, eating outside in the evenings and mornings.  The kids both have golden blond hair and blue green eyes, more like each other than like either of their parents.  They are sometimes naked, almost-always happy. Lucie, at four, is creative and funny and endearing—one afternoon she runs around in a cape–and occasionally she tries to be the boss.  Paul at 12 months is mostly exploring or eating and looking to be held.  What is striking about all of the Vink grandchildren (for someone who has none) is how open, friendly and welcoming they are, and how much love they exchange with their parents and grandparents.  They are used to daycare, aunts and uncles, grandparents and cousins.  I am yet another source of curiosity, hugs and affection. 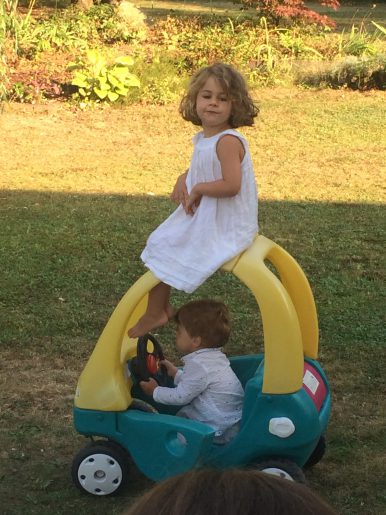 Lucie and Paul at their grandparents

On all of my days with both sisters, we are in the water, at public beaches on Lake Geneva, from a boat in the middle of the lake, or at a small lake in the mountains near Bernex.  The beaches have pebbles, tough on naked feet, but the water is clear and clean, and I have no need for goggles.  The views are incredible.  I love outdoor swimming and the cool clear water, daily, is an incredible paradise for the now-old-man Californian.

Anne and David are home for the summer break but enjoying London.  For David, London keeps him working, teaching, and busy.  For both it is theater, many other things to do, and friends.  They know lots of people, and more so as they are open and generous and stay in touch with many, I think, as they have with me.  Their lives are very bi-cultural, multi-cultural;  their household, including the grandchildren, alternates between French and American English.  This is an easy, relaxed place for me.

Anne’s charm is elegant and mischievous.  Like Therese, she is efficient and seems to do everything without effort.  Laura handles repairs to the washer and refrigerator.  The house is pristine, without much or any outside help.  Anne is an open and interactive grandmother, strict when needed. 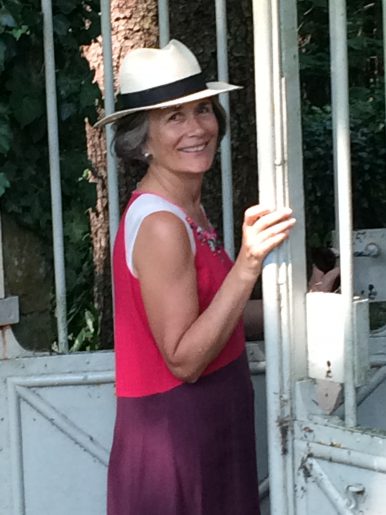 Anne, showing me the world

Like me Anne loves beautiful places and houses so shows me a few Swiss villages, on the lake and in the hillside vineyards.   All are superbly maintained, as are the hedges and the open farmland between them.  Many of the newer buildings are conventional, some very interesting.  The older farmhouses are large and voluminous.  An entire effect of scale and history has been maintained.  The shopping streets are real streets, with stores and café’s, catering to those who live there, not just to tourists.  This is a wealthy, gilded, area, which alone does not explain the Swiss commitment to intelligent urbanism.  Change is everywhere, but it is carefully managed, and history has not been sacked.