After Bordeaux, I took intercity rail service to Montpellier.  The train line passes through Toulouse and continues to Marseilles, but I stopped in Montpellier to see one of the fastest growing metropolitan areas in France.

Its took me a few days to realize that both the city’s future and its present are reflected in the new Sud de France train station. It is a remarkable and impressive structure, and likely big enough to handle future growth.  When I left it and found myself, on a Sunday afternoon, at some distance from the center of the city, I was taken aback.  This didn’t seem very French.  But Montpellier’s France doesn’t look at all like the France of my youth. 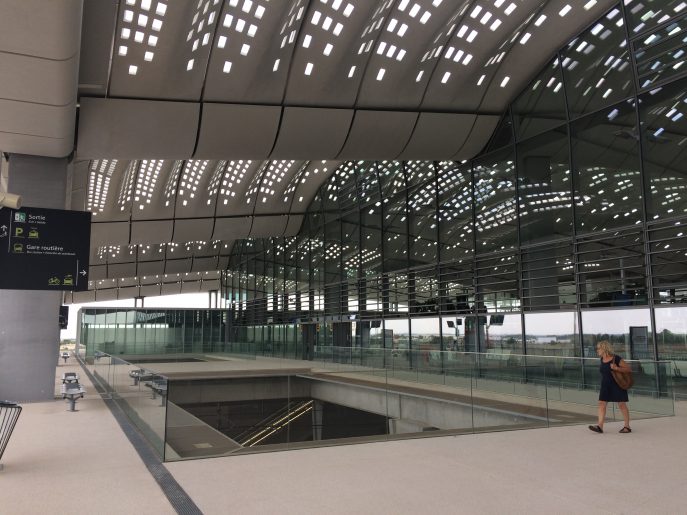 There is of course an old Montpellier.  It is on a defensible rise, formerly surrounded by walls, and now ringed by roads and streetcar tracks.  It is very old, almost medieval (founded in 985), not so much the buildings which mostly date from the 18th and 19th centuries, but the tightly woven and many narrow streets.  There are electric lanterns lighting the narrowest of these, and their effect is both helpful and antique. 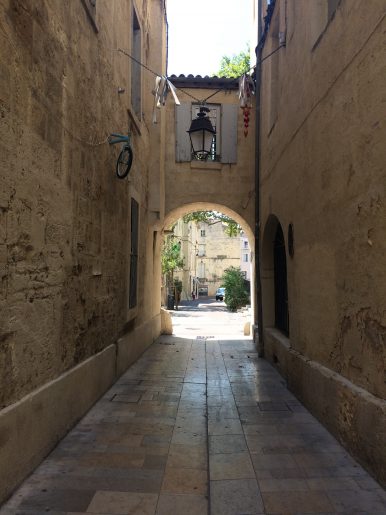 a narrow street in old Montpellie

The feeling of ancient remove is most marked at the northwestern end of the city, near the Cathedral of St. Pierre and the old medical school which abuts it, and around the Place de la Canourgue, which was its center in the 17th century. The nearby streets are quiet and small, punctuated by open squares and small verdant parks that are closed at night.  (I had two wonderful evenings, and then a third,  at l’Atelier wine bar on the Pl. de la Carnourge, whose owner Emmanuel Bray, suggested a very good Macon Villages (2017), and then served a very good apricot tart, pairing it stupendously with a white Auslee cuvee (2015), from Austria.) 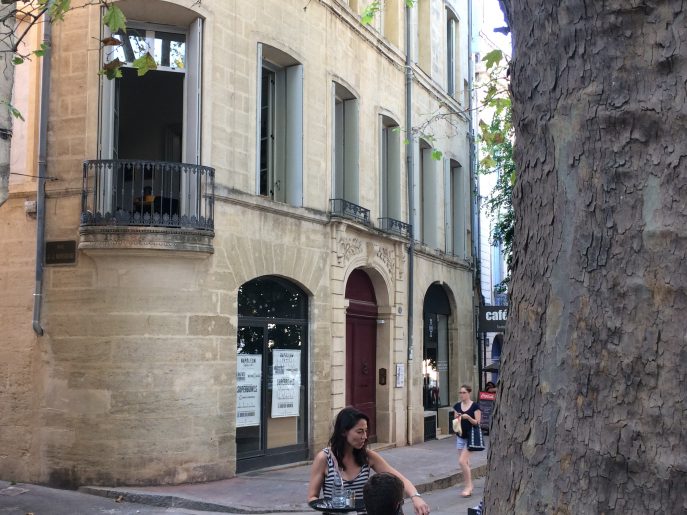 a window and a waitress on the Place de la Canourge

I have taken again, on this trip, to visiting churches, a deserving European habit because of their frequent beauty and spirituality, and because they are also cultural centers, for art and for music. In the case of St. Pierre, a one-euro donation for church maintenance, as I was leaving, earned me a private tour from an informed volunteer.  A large 17th century painting, of a reactive Joseph, awakened by an angel with news of Mary’s pregnancy, was interpreted as his surprise at being told that he was to be the stepfather of the Son of God.  And the adjacent hospital, according to the volunteer, was merely housing for the medical students.  Classes were held outdoors or in the church. Dissections were held in the nave.

Montpellier is a famous university town, with ancient liberal arts, medical, and law schools, and a large portion of its population is students.  The medical school is the world’s oldest in continued operation, its early success due to the liberal policy of the lords of Montpellier, allowing any licensed physician, including Jews, to lecture.  The school was immensely prestigious during the middle ages, according to Wikipedia, reputed to have inherited the medical knowledge of the Arabs and the Jews and attracting students from all over Europe. 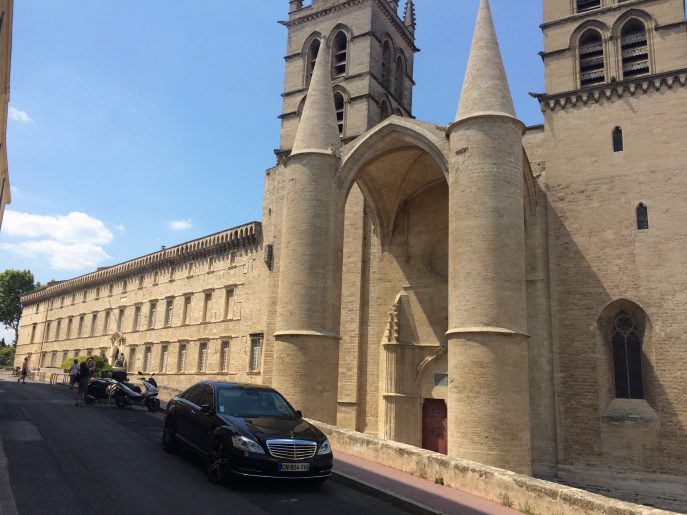 the cathedral of St. Pierre and the old medical school

The center of old Montpellier has not been extensively redone, but it has been preserved, and museums and cultural institutions have been added.  Post 19th century buildings are rare and are generally built at the edges of the old city. But Montpellier has been growing beyond the old city since for well over 100 years.

The great and extensive Place de la Comedie faces an opera house and other 19th century buildings. It is filled with people who are walking through, waiting for the streetcars, sitting in cafes or watching evening acrobatics.  Its activity is of little interest to me, but clearly it captivates many others.  At its southern end, the place opens to another square, and then transitions from stone to ceramic paving.  The newer place is framed by modern, concrete buildings, including shops, perhaps 20 to 30 years old, a very good bookstore, cafes, and an architecturally interesting Ibis Hotel where I am staying.  At the end of this square is a very busy, multi-story  shopping mall, which has a among others,  Galleries Lafayette, Monoprix and a FNAC.  Throughout the day and evening, large numbers of people are walking in and out of the mall, across the square, into the Place de la Comedie, or the reverse. Everywhere there are cafés, bakeries and snack bars.  These public squares are car free (with parking underneath the mall) and very successful. 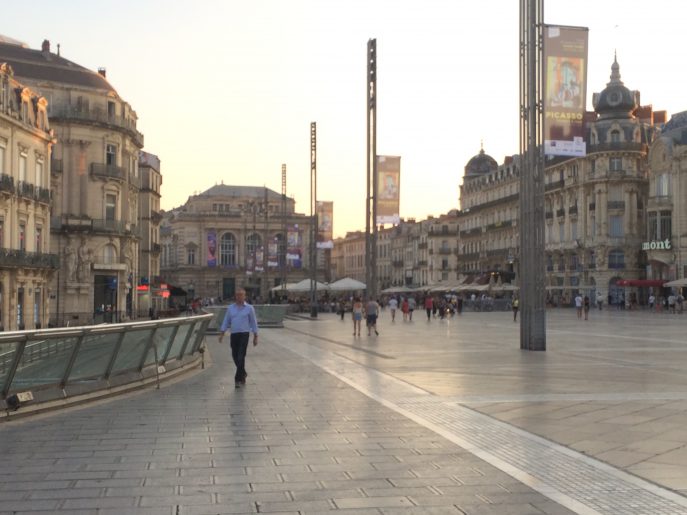 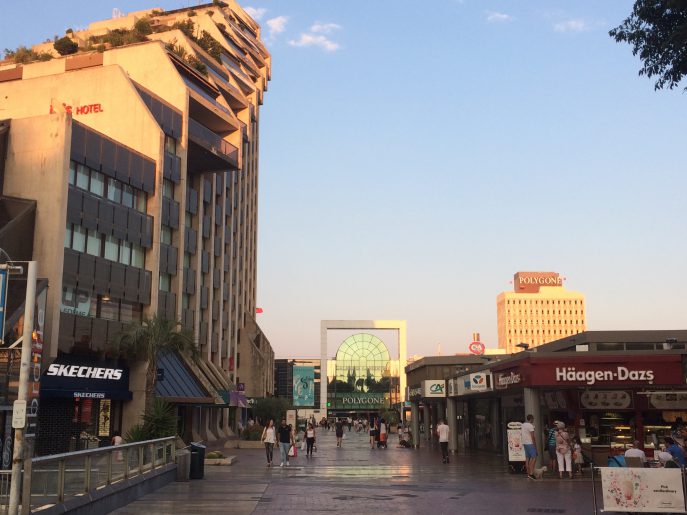 The modern “place”, my Ibis Hotel, and a shopping mall

North of the Place de la Comedie, the pedestrian activity flows into much of the southern portion of the old city.  Most of the old city has been closed to vehicular traffic since 2004.  At night, the streets and squares are filled with tables and people and restaurants, outdoor cafes and wine bars.  Daytime, the stores are for the occasional shopper, juice stands, luxury goods, etc.  The old buildings are there, but the street activity is transitory and one-dimensional. It took me some time and street-car travel to realize that the new soul and dynamic of Montpellier have moved outside the old city.  Much of the old city has been re-adapted as an entertainment center.

Yesterday, I took a streetcar ride to the Olympic swimming pool in Antigone, a quiet planned neighborhood of large, modernist offices and apartments, built after 1979.  The pool, the master plan and most of the buildings were designed by the Spanish architect, Ricardo Bofill.  Not the very strikingly modernist pool, but many of the other buildings, are neo-classical, in concrete, with exterior columns, a material that has not held up well and a design that is reminiscent of the 1930’s and Mussolini.  The emphasis is on calm, not on street life—I saw few stores, but visible through the doorways of a couple of larger buildings are some very beautiful courtyard gardens.   Walking out of the Antigone and back towards the old city, I saw streets, with cars and shops, 19th century buildings with ornate iron balconies, and taller mid-rise, apartments, some attractive, others unfortunate.  These were pleasant, normal places, reflecting the character of the 19th-20th century city that lies around the old core. 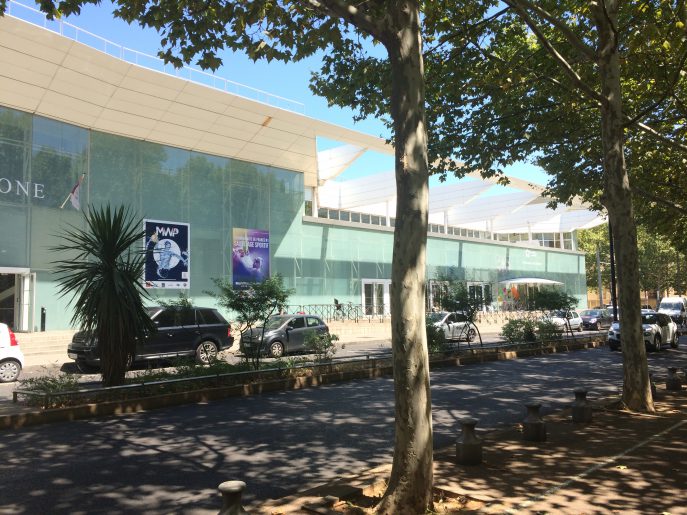 the Olympic pool in Antigone 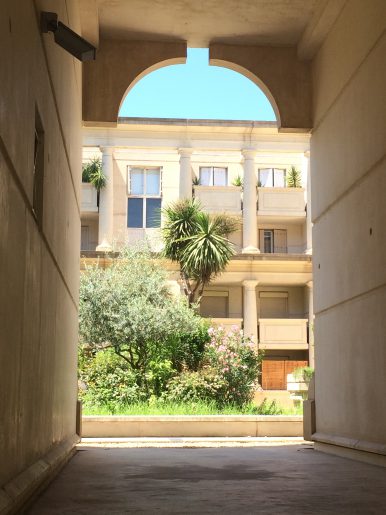 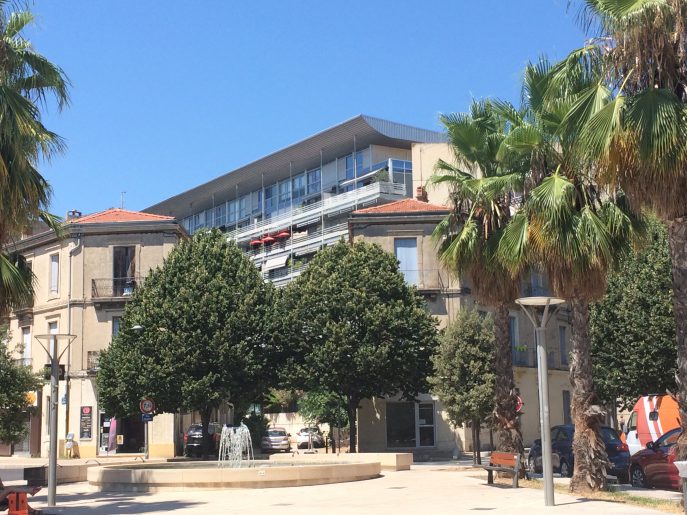 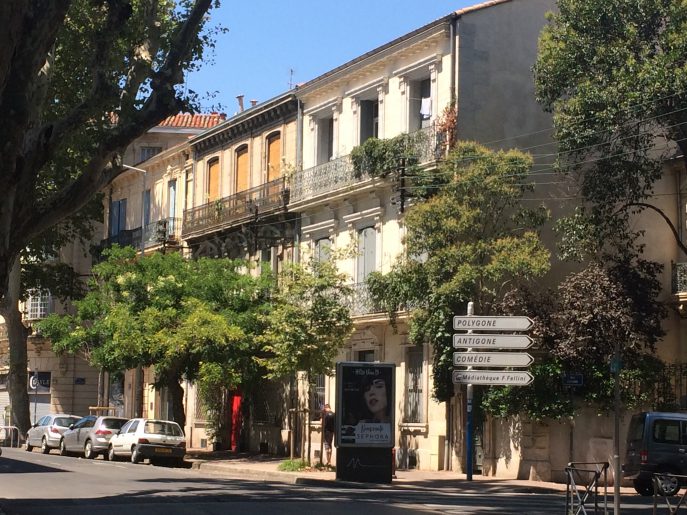 outside the old city

Montpellier is a formerly provincial city that is pushing well past its 19th century boundaries.  I followed the same streetcar line in two directions this afternoon, in the westerly direction to the terminus at Odysseum, and to the northeast,  just one stop short of the end of the line at Mosson.  Riding west, I saw many new (or no-longer-new) apartment buildings, surrounded by open areas and gardens, within walking distance of streetcar stations, and with roads and parking. At Odysseum, I walked off the tram into a new, two-story shopping area, which reminded me of nothing more than southern California, and specifically, with this week’s dry heat, of Palm Desert, where I visited my parents regularly some years ago.  And then, I understood why Montpellier is growing.  It is France’s version of the Sun Belt—affordable, modern and with wonderful weather.  I spent much of my life running away from California, and here, happily, I felt at home. 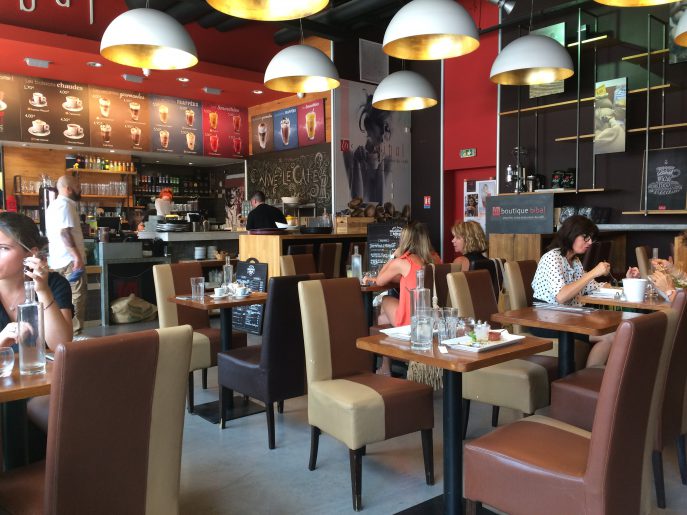 the salad place at Odysseum

Of course, it is not the same. This shopping center has sun and outdoor dining, including a very nice salad place where I had lunch, a Burger King and a parking lot (just like California), but its public goods are important and visible, a kitschy outdoor Greek theater (with classical statues and a Mahatma Gandhi), a planetarium and an aquarium, a street car station.  But the cars in the lot are smaller.  The atmosphere less blatantly affluent.  From the train, I saw apartment buildings rather than single family houses.  What it does have is the same celebration of good weather and the same feeling of middle class leisure. 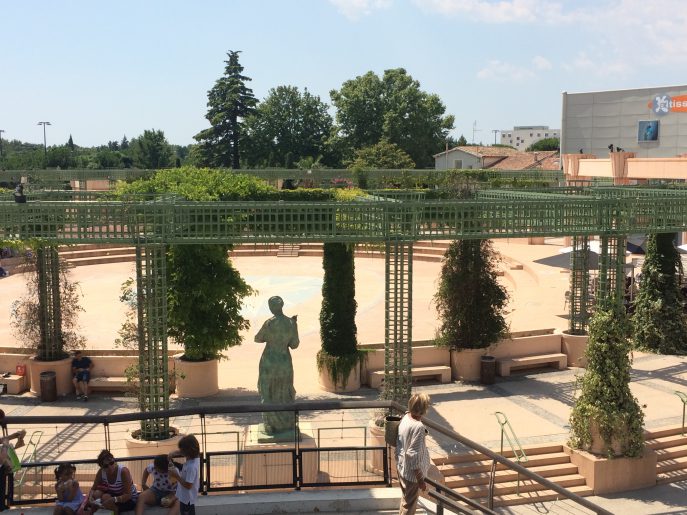 the Greek theater at Odysseum

Returning to the center, again by streetcar, I got off at the Port Marianne stop facing a modern building and a Kaufman & Broad showroom, a southern California builder, for whom my father did some consulting engineering work in the 1970’s. I was told that Kaufman & Broad is active all over France.  Beyond it, the neighborhood, the open space, and the city hall overlooking the Lez River were strikingly beautiful.   While cultivated Frenchmen (including most of my friends) prefer their country houses and elegant, or at least antique, Paris (or Bordeaux) apartments, a sunny style of modern apartment living is better, for many, than old darkened houses on narrow village streets (or carless, narrow, Montpellier streets).  There is a reason for suburban living, and Montpellier is producing a higher-density version of it. 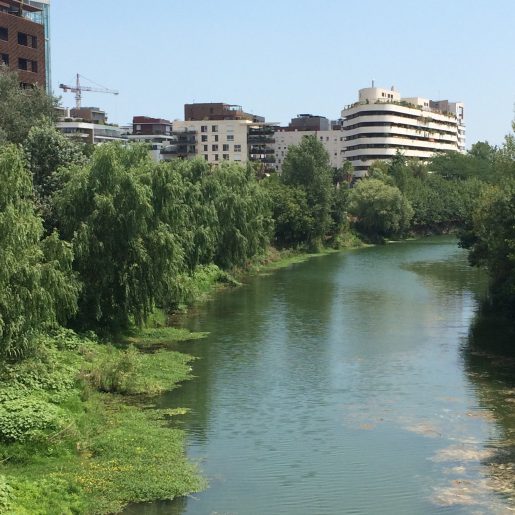 a modern city on the Lez River 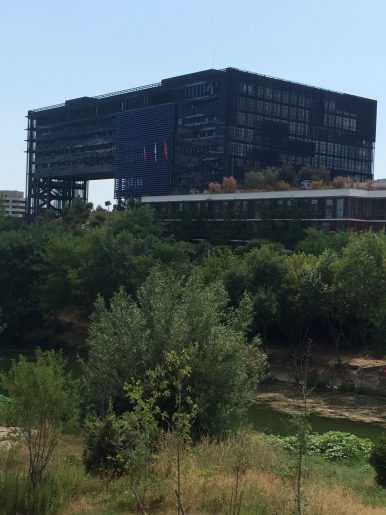 On the second trip, north and east, I saw again, an older 19th-20th century city, this time with some houses, outside the old city.  This gave way again, to newer offices and apartments, less striking than some I had seen on the westerly route.  What was impressive, in this direction, was the university and hospital buildings.  Montpellier has retained its intellectual tradition, and an Irish passenger next to me confirmed that it is a major medical center.  My map shows a number of hospital and university buildings on the north side of the city.  This one is apparently brand new. 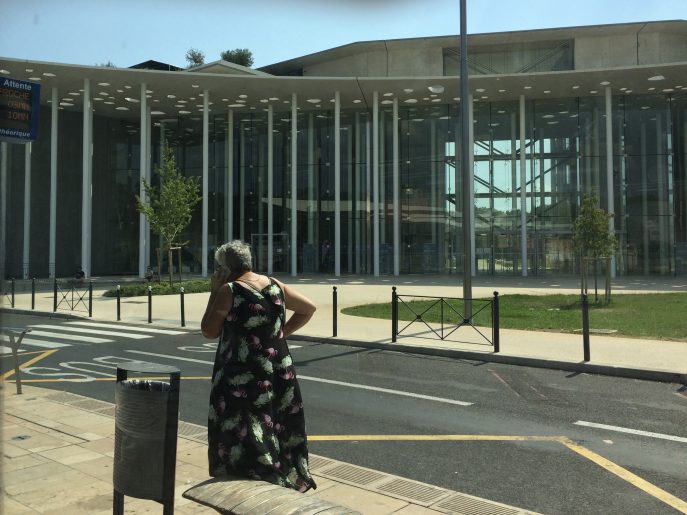 Only at the outer stops did I see what I had not seen previously. A banlieue of deteriorated contemporary housing, populated almost exclusively by middle eastern immigrants.  Elsewhere in the city, everybody appears to mix with ease.

One Response to Looking at France’s cities: Montpellier