From Arcachon, I took the train into Bordeaux.

After the importance and elegance of Paris, and the evident, nearly uniform affluence of Arcachon and Pyla, I was initially taken aback.   Of course, Bordeaux is much smaller than Paris, but much of it is also run down.  My first walk, from the St. Jean train station, was through a busy area of very old, two story houses, generally in elegant limestone, but not in good shape.  Everything looked low rise and small.  Even at the center of the city, the buildings have no more than 4-5 stories, and in many other areas, there are houses, shops and streets that are too neglected to be charming.  The vaunted St. Catherine Street consists largely seedy and generic shops, drawing tourists and poor immigrants. 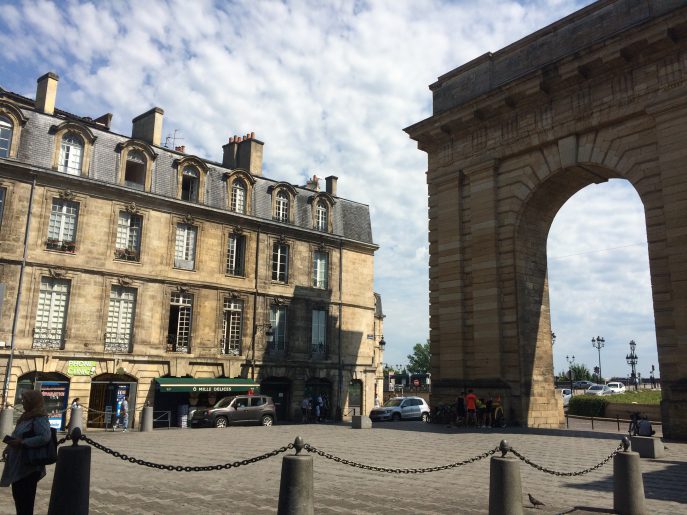 This is not what was emphasized in the reading before my arrival.  Queen Elizabeth herself described Bordeaux as elegant.  The historic city has been largely redone.  Its classical buildings are among the finest in Europe, and its historic district, which appears to include the entire center city, is a UNESCO world heritage site, the second largest in France (after Paris).  Its history and wealth are fortunately tied to the wine trade–Bordeaux vineyards are north, south and east of it—and unfortunately to the slave trade, although in the latter it is not unique. For some hundreds of years, Bordeaux was an English possession, although the English rulers at that time spoke in French.  The trade in “claret” has strong links to England, as shipping wine by boat to England and Holland (where it was made into spirits) was easier than shipping it overland in France.  More than in the rest of France, I was told, the bordelais like clairet (between a red wine and a rose) and tea.

But the city has a cultural importance that held my expectations, and it improved vastly with the visit.  Indeed, within a few days I had found and was converted to its incredible beauty, both where it has and has not been fixed up, now fully convinced that a highly-evolved urbanity can exist in a city that is both relatively small and affordable. 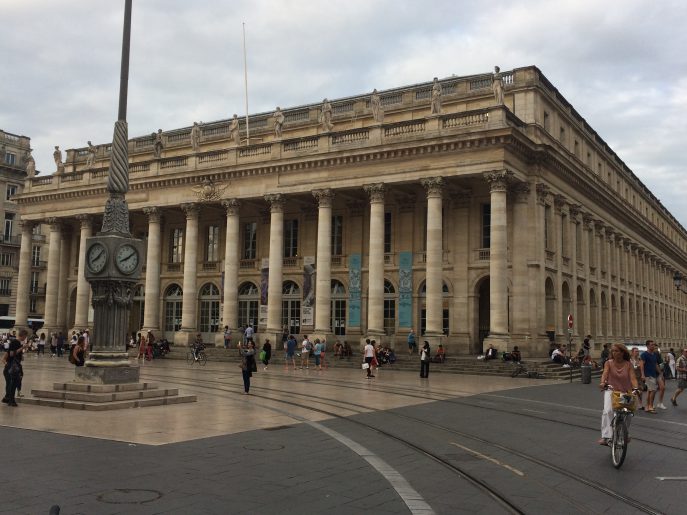 Bordeaux is a city of endless, classical, limestone facades, gracing the housing of both the rich and the poor, the native-born and the immigrant, and providing a varied yet consistent backdrop to government buildings, the public garden, traffic circles and irregular church “squares”.  None of it has been over-renovated—it all looks and feels old.  The buildings, dating from the 17th, 18th and even 19th century, are mostly contextual, that is modest, with occasional flourishes, all in limestone, respectful in scale. 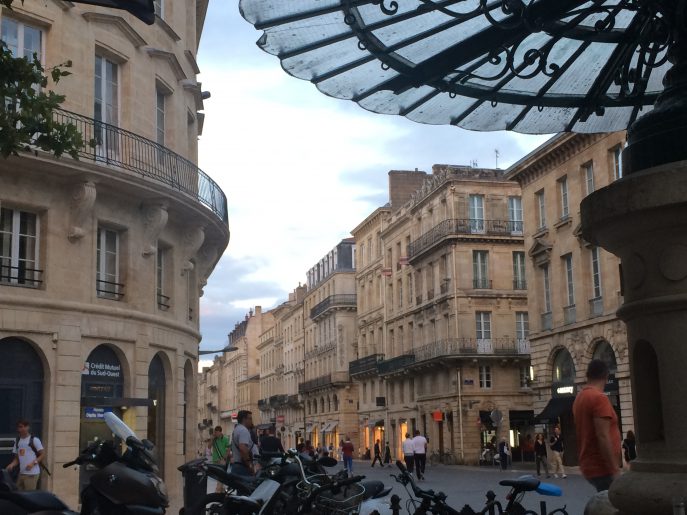 The city is busy with traffic, much of it from small cars, visible everywhere except in the large pedestrian area at the city’s center, yet unlike well-preserved Boston, it not overwhelmed by its considerable traffic—most of the streets are simply too narrow.  The whole thing is tied together by a bus network, which I never figured out, and by a modern, futurist, tram system, that floats slowly on the streets, tracks embedded in the stone and cobblestones that it shares with cars, and even with pedestrians on the main central square that faces the Grand Theatre.

The buildings, even the largest and grandest, are intimate, no more than 5 or 6 stories.  Many are one-family houses.  Cafe’s, bakeries, grocers, and luxurious stores such as JM Weston (the shoemaker), Figaret (the shirtmaker) and iconic Hermes (which epitomizes luxury by selling nothing that is absolutely needed), are all graced with classical facades.  Even the 50-meter public swimming pool on the rue Judaique, which dates from the 1930’s, with a modern glass curtain wall, sundeck, and 1970’s concrete dressing rooms, is set behind an 18th century limestone gate, perhaps the former entrance to a park or an aristocratic residence, known in France, as an høtel.   (Sorry, I cannot get my mac to type the circumflex).

Does it lack individuality?  Perhaps, if you are an architect or developer seeking creativity, or a land owner who would prefer to speculate on land acquisition to maximize profit.  All of these buildings are protected, and changes are supervised by the French administration.  But if you are walking in it, shopping in it, rushing home in it, sitting in a café or on a bench, or watching people in the street, it feels immensely urbane and human.  I have not yet found out where Bordeaux houses its high tech or aeronautics facilities, perhaps outside of the city center (a later topic), but I saw discreet signs for law offices and banks, and less discreet windows for neighborhood real estate agencies, restaurants, confectioners and pastry shops (so many of them), grocers and cafes everywhere.  The center remains active, much more than a tourist destination, although there were many of us, filled with people going about their business.  This is not at all how I remember the centers of Lyons or Toulouse, and that is not my first impression of Montpellier, but that will be checked on my visits to those cities.

In much wealthier New York, we house the poor in 19th century brick walk-ups, with some limestone trim (Why we preserve these, I have no idea.) or in faceless brick high rises, which also house the rich and the middle class. Glass elegance we have, but limestone is mostly limited to the first two floors, even on very good Manhattan buildings.  (There are of course a few exceptions such as 740 Park or 19 East 72nd Street.)  When a highrise condominium, 15 Central Park West, was built and clad in limestone, its use was a social and architectural tool, and a marketing statement that attracted significant press attention.

So in Bordeaux, a much poorer place than New York, I walked a huge UNESCO heritage site and a city of seemingly endless, modest, luxury.  To what can I compare this in the United States? And I do not mean the age, rather the feel.  To a significant degree, we mistreat our older cities, either overbuilding and overpricing them to ruin, or destroying them through neglect.  Privileged Americans, we travel here to admire what we refuse to preserve or create at home. 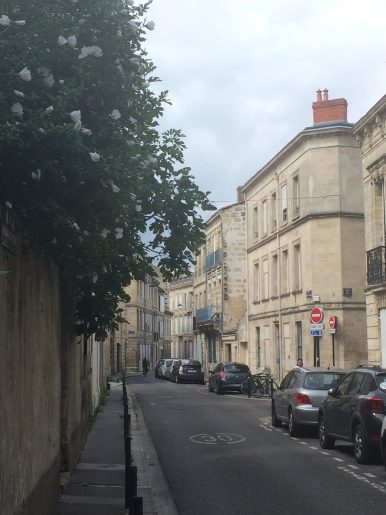 behind the basilique St. Seurin

I had a wonderful afternoon in the center of old Bordeaux:  a  meeting at the Grand Hotel, facing the Grand Theatre, chocolates in an elaborately old-fashioned shop around the corner, coffee at the attractive and hip Alchemist, food shopping at the round and covered marketplace Grands Hommes, and tea, from Mariage Freres (founded in 1854).  Then peeks into a couple of hotel lobbies that were a lot nicer than mine—to one of which I eventually moved.  And of course, a renaissance church and a lot of cleaned up, beautifully maintained, limestone buildings.  Then a swim in that Olympic-sized pool on the rue Judaique, and a long pleasant walk past crowded trams, to my hotel, interrupted by a brief unplanned stop into an organ recital at the Cathedrale St. Andre.   And then a nap and bread and cheese and fruit from the nearby Capucins market.

On another afternoon, I strolled through old residential neighborhoods in Saint Michel, Saint Paul and Saint Pierre, where tightly woven streets alternate with open squares and some wider avenues.  The buildings, still limestone, are alternately tired and redone.  The population looks settled and local, immigrants and young, somewhat multiracial, North African and French, a comfortable place for me.  I found a classic, charming bistro facing the St. Michel basilica, and returned that evening for a classic, although mediocre, meal. 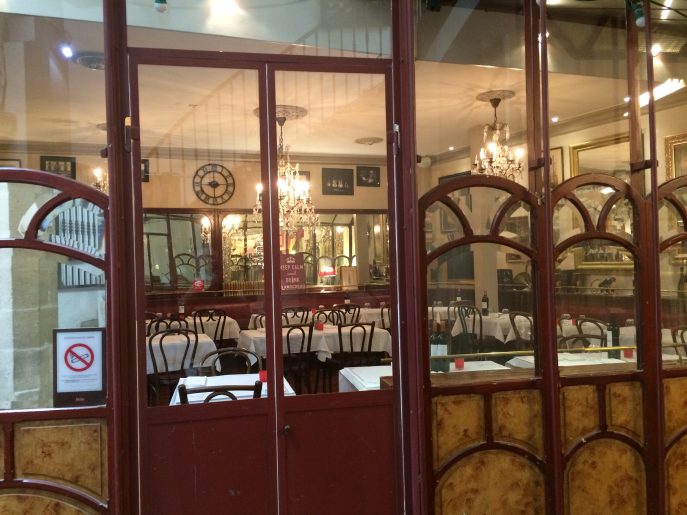 restaurant in the St. Michel district

Have I mentioned the wine culture in Bordeaux?  I had only a small taste of it, but as a northern Californian, and former San Francisco resident, I could not help reacting to the similarities and to the differences.  San Francisco is to Napa and Sonoma as Bordeaux is to, well Bordeaux wines.  San Francisco is a stunningly beautiful city, and it has the considerable advantage of extraordinary geography, but it has the considerable disadvantage of being hugely expensive.  Bordeaux offers the refinements of its classical design and its history, in a less dramatic geographical setting, and its ancient wine culture struck me, ironically given its US reputation, as more affordable and accessible. I took a very good, short wine tasting class at the striking new wine museum, the Cite des Vins.  The teacher’s detailed knowledge was impressive and without any of the ordinary and usual references to the important celebrities who consume or made them. It was just about the wine.  Then I visited a second museum in the Chatrons district, which examines the history of the wine trade.  And on my last evening, a visit to the Bar a Vin, a wine café, in an eclectically redesigned classical interior.  Operated by the Bordeaux Wine Council, and crowded in the evenings, I waited my turn to try interesting, if not the very best wines, at 3 or 4 euros a glass (with cheese or charcuterie). 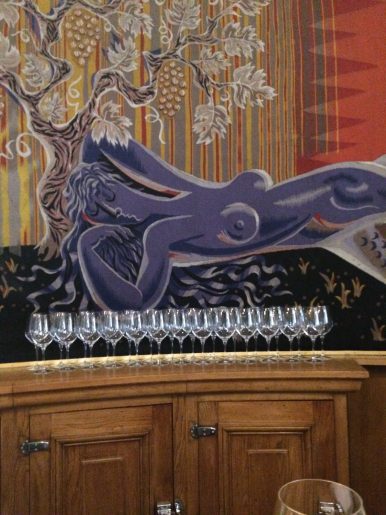 Bar a Vin, behind the bar 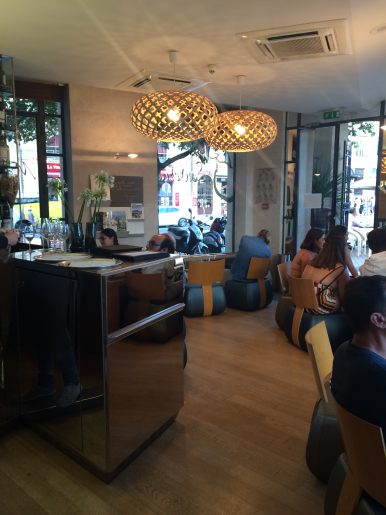 On an earlier morning, I returned to the Capucins market for a coffee, and entered into a long conversation, with a friendly, chic, Parisian woman, who followed a man to Bordeaux four years ago.  The man did not work out, she said, but she has kept her small rental house, with two bedrooms, a bathroom, and a small potager, or vegetable garden.  The house is large enough for her work studio, where she restores and resells mid-century furniture.  Her income is a bit less than it was in Paris, but her expenses much less. The native bordelais are not terribly friendly she told me, so her friends are others who have moved in, also from Paris.  I was made to understand, by her and others, that Bordeaux is conservative, and not terribly open to outsiders and immigrants.  But with a couple of exceptions, I found everyone to be friendly and helpful, despite my accent and occasional word trouble.