It argues that the city’s construction of new mass transit lines, with public funds or debt, is a subsidy to property owners, who should instead be contributing.  For the first time, at a recent MTA board meeting, Carl Weisbrod, board member and former head of the City Planning Commission, argued that “some of the cost should be paid by the real estate development that new service will make possible.”  The MTA will now ask for legislation to make this “value capture” possible.

(Below:  Transit oriented development of the early 20th century,  108th Street and Broadway. ) 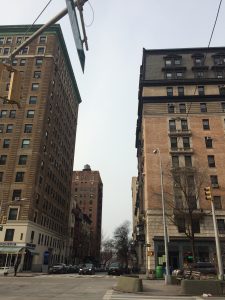 Linking real estate development to transit charges is not a new concept.  As part of the recent Midtown East rezoning, builders of new high-rise office towers, are required to pay for improvements to designated subway stations.

These contributions may or may not be adequate, and it may or may not be appropriate to legislate some form of “value capture” tax as new transit improvements are planned.  But it is illegitimate to ask the public, or any particular constituency, be they riders or real estate owners, to stretch their pocket books unless the system is also held accountable for its costs.

A simple Google search found three articles that detailed how expensive our transit system has become.

Vox–January 2017–This article reports that the second phase of the Second Avenue subway is budgeted at $6 billion, or $2.2 billion per kilometer, with only $1 billion allocated the MTA’s capital budget.  Yet the $1billion should be adequate, with Berlin, Paris and Copenhagen subways budgeted at respectively $250 million, $230 million and $260 million per kilometer.  Labor costs are only part of the problem, as there are certainly strong unions in western Europe. The size of the stations and the depth of the subway line also drive up costs.   https://www.vox.com/policy-and-politics/2017/1/1/14112776/new-york-second-avenue-subway-phase-2

Pedestrian Observations—July 2017—Vox reporting relies in part on an article in this public transit blog, written by Alon Levy.  It compares the per kilometer costs of NYC transit projects with those in other countries.  The results are shockingly negative for New York, even when compared to transit construction costs in London and Amsterdam.  Phase 1 of the Second Avenue subway is cited at $1.7 billion, with a London project cited at $450 million per kilometer and an Amsterdam project cited at $410 million per kilometer.  https://pedestrianobservations.com/2011/05/16/us-rail-construction-costs/

Curbed—October 2017—This analysis, also by Alon Levy, compares NYC subway’s operating costs to those in other cities.  New York subway’s hourly and per mile costs are exceeded by our PATH system and by the hourly cost of Los Angeles Metro Rail.  They are comparable to the hourly and per mile costs of the Boston T, but exceed cited costs in other cities, including  in western Europe. https://ny.curbed.com/2017/10/13/16455880/new-york-subway-mta-operating-cost-analysis