Recently, in order to price a wide, multi-family Village townhouse,  I considered sales of other multi-family and ready-to-build townhouses and compared these to recent sales of wide, 1-2 family houses.

Ready-to-build refers to two houses on prime blocks in the West Village, which sold last year with architect’s plans and Landmark’s approval in place.  The higher price was for a superbly located Victorian house at 64A Perry Street (photo below), which sold for $13,250,000, or $2,880 per planned square foot.  The other sold last year for $7,900,000, or $1,580 per planned square foot, on an excellent block of West 11th Street, between Waverly and West 4th Streets. 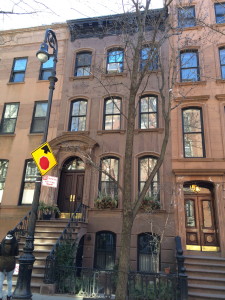 Multi-unit townhouses had three or more apartments, and were often sold for immediate conversion to their highest and best, single-family, use.  Most of these are located on good townhouse blocks in the West Village, although a few are at more commercial addresses, like Hudson Street, or east of 7th Avenue.   These transactions, one current and the balance from 2013, closed from $1,089 to $1,473 per square foot.  In this category, both of the highest prices were for houses with rent-regulated tenants.  One sold for $6,100,000 ($1,473/SF), a six-unit, 18′ house on charming, curved, Morton Street, and it had two rent-controlled and one rent-stabilized apartment, as well as a vacant duplex and a vacant penthouse.  The other house is on West 11th Street, between 6th and 7th Avenues.   It was last asking $6,750,000 ($1,127/SF), and it has four rent-stabilized units.  A contract has been signed.  Note the differences in the prices per square foot.

Prices per square foot are based on size estimates from the broker, the floor plan, or the public record.